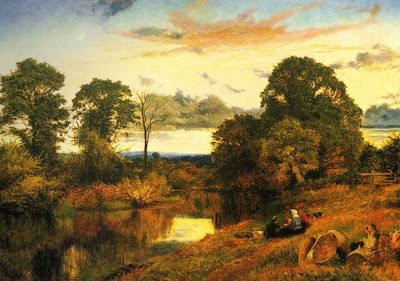 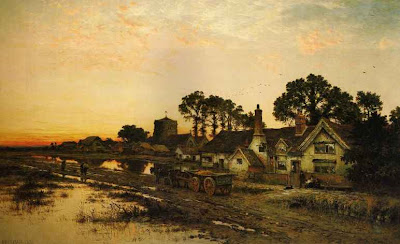 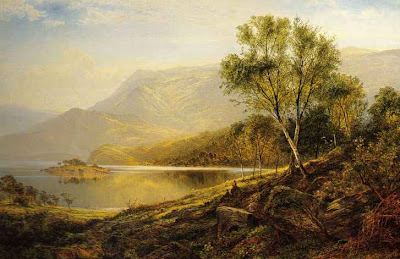 [Sunset] 1861
oil on canvas
[Peaceful Evening] 1889
oil on canvas
probably painted in Worcestershire (his native county). A smaller version of this is also known.
[Summertime, Ullswater] 1867
oil on canvas

This fine view of a parish church and inn, with a sky lit by the setting sun, almost certainly shows the landscape of Worcestershire, Benjamin Williams Leader's native county and his most favoured painting locality. He had been born, brought up, and educated in Worcester. In 1862, he had settled at Whittington, a village on the south-eastern fringe of the town. The breadth and balance of composition of Leader's later paintings place him within a long landscape tradition and his works are often praised for their distinct and recognisably English character. Lewis Lusk, for example, wrote of Leader's 'careful retention of the picturesque, his style of arranging his masses, his selection of cloud effects, his peculiarly poetic strain of the Lyric order, which so often makes his canvas an illustration of some choice verse of an English poet - there is sufficient likelihood that these qualities of his work will always ensure respect and study from many a maturing mind. These are all inherent in the national character.'

Leader became famous on the strength of one particular painting - February Fill-Dyke (Birmingham Museums and Art Gallery), which he showed to acclaim at the Royal Academy in 1881. This was followed by a series of works treated with attention to poignant and fugitive effects of light and atmosphere. In the Evening there shall be Light, exhibited at the Royal Academy in 1882, led to Leader's being elected as an associate academician. The same painting won a gold medal for the artist when shown at the Paris Salon in 1889. Our own painting, Peaceful Evening, which dates from 1889, may be compared specifically to a work entitled Parting Day, which was shown at the Royal Academy in 1883 and which contains within its composition a view of the same church seen in Peaceful Evening although viewed across the breadth of a river instead of the lane and flooded field seen in the present work.

In his diaries Leader records working on the present picture during January and February 1889. At the time he referred to the picture as Evening Roadside Inn or Evening Roadside Public House. In that same year he sold the picture to Agnews and at that time referred to it as A Roadside Inn. At the time of the sale he may have inscribed the more poetic title of Peaceful Evening, Hesperus onto the stretcher.
A smaller version of the picture is in the collection of Ballarat Art Gallery, Ballarat, Melbourne, Australia.

We are gratful to Ruth Wood for her kind assistance in cataloging this lot which is to be included in her forthcoming catalogue raisonne of the artist.
at 6:00 AM