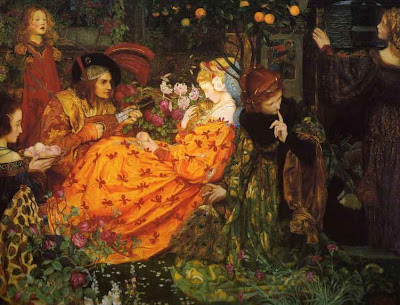 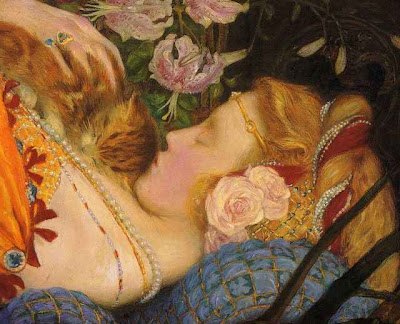 1901
oil on canvas
.
A bold statement this, but probably the most beautiful Victorian picture that was painted in that period. It was an early picture of the artists and displays her richness of detail and ambition in conveying allegory in her works.
Most of her paintings have literary themes often drawing on poems, legends or folk tales.
When first exhibited there was much debate as to the meaning of this painting.
It seems to be to do with the Princess being surrounded and trapped by her riches and the 'real' world being kept from her and perhaps the unwitting cruelty that lies in such ignorance.
She was one of the most admired painters of her day (and still is by me at least!) and was described as a Pre Raphaelite revivalist or a Neo-Pre Raphaelite because of her meticulous technique and luminous colours. One critic said of her use of colour : 'Colour ? The room glows with it, as if it were flung out of live jewels.' She was often compared to the young works of Millais.
at 6:00 AM

yeah, it must be the most beautiful picture of that time along with "Uninvited Guest"

The colours are so beautiful.