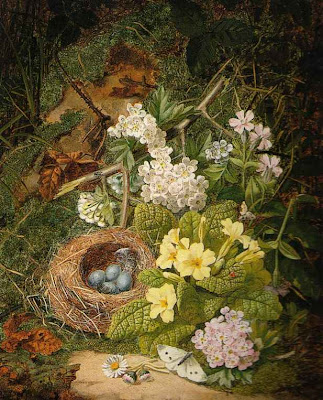 [Still Life of Primroses, Apple Blossom and a Birds Nest]
1857
oil on panel
.
1829 - 1875.
http://www.artnet.com/artist/18126/thomas-worsey.html
.
added 21 Feb 09 courtesy of Dianne Brown
Thom W, RBSA, 1829-1875
The Ws all came from S Staffordshire, but his branch had moved to B'ham. The Ws are best known for being canal boat builders in Tipton.
Thomas began work in his uncle's japanning and papier mache business but as he had obvious talent he was apprenticed elsewhere to become an ornamenter of papier mache wares. He remained at this till about 21, when he decided to branch out as an artist. He painted 10 pictures and sent them off, 9 were sold and this decided him to become an artist.
He exhibited at the Royal Academy and was a member of the Royal B'ham Society of Artists..He also lived in Scotland for a time. He was never in very good health and died perhaps before he became truly well known
I have 3 of his pictures, and there was one once on the Antiques Road Show.
at 5:00 PM

Ohhh this is sooo pretty! Now I have to look the works of this artist up!
Great find...

I can't find much about him, strasnge as he was obviously very talented. Needed a better agent (lol).

I am a Worsey and I understand that I am a relative of Thomas Worsey, my father being born at Tipton in the West Midlands. I understand that I am also related to Joe Worsey the famous Worsey boat builder, also from Tipton. The reason for my blog is that there is a wonderful painting hanging in the drawing room at Bantock House, Merridale, Wolverhampton. I have a photograph of this painting if you would like to see a copy. I further understand that Wolverhampton City Council have an additional painting by Thomas but I have not seen it yet.
Patricia Griffin (nee Worsey)

Thank you, I would love to see them, as he is a quality painter that doesn't seem to have received much attention in the past.

Thomas Worsey Jnr was the son of Thomas Worsey, a beer seller in Birmingham. Thomas was inextricably linked with the Worsey canal family of Tipton and later the canal boatbuilders as well as being related to the Fellows in Fellows, Morton and Clayton: one of the best known companies in canal history.
In his will, Thomas left £25 to his friend and framemaker, William Jackson; sums of money to Eliza and Mary Lee; his house to his niece; and everything else to his brother.
Check out askart for my contribution to his biography.

I hail from the Cardiff branch of the Worsey family and have since emigrated to the USA.
I was able to purchase a couple of pictures of Thomas Worsey at auction and it is nice to have a connection to who would probably be a great, great, great uncle or so.

Hi John, So lovely to pick up your message. I was under the impression that the Worsey name was common mostly to the Staffordshire area of the UK and elsewhere in the UK there seemed to be an L in the surname ie Worsley. So it might be interesting to find if there was a connection with your relatives from the Staffs area. Most Worseys were connected to mining, which might also help explain the South Wales connection. You are very lucky to possess paintings by Thomas Worsey.They are rare to get hold of and expensive when they come up.

On a separate note, I love Rugby and support Wales (would you believe). The Cardiff Stadium must be the best placed stadium certainly in Europe.

Yes our family was related to the Staffordshire branch and we had aunts and uncles up there. There is a family mining connection but on my mother's side. As you mentioned the Staffordshire Worseys were best know as boatbuilders and I remember my father Michael Worsey (1937-2015) telling me this.
There are actually some Worseys in California and scattered throughout the US and I imagine we are all somehow related as it is not a common name.
Best wishes and thanks for the reply and yes the Millenium Stadium when full is a pretty special place.

Jon, it is so lovely to meet up with probably a distant relative. I also paint but I have found the type of painting I like to do
are to copy my own version of the Great Masters. If you troll through my Facebook page you will be able to see a couple or so of them. I will post a copy of the painting that stands in Bantock House, Wolverhampton, later this evening (my time). Incidentally, my father was actually born in Tipton and moved to Hollybush when he was three years old. He started down the mine(Hilton Main) when he was thirteen. I did quite a bit of research many years ago and you have now inspired me in to wanting to re-look at what I found. All of my father's brothers and sisters are no longer alive and unfortunately, I do not have any connection with immediate cousins which is a great pity. I still visited my aunts and uncles until their demise but cousins seem to want to keep themselves to themselves. As a relative, I suppose I can send love and best wishes to you and your family from all my sisters and brother. x