George H. Bernasconi - Meeting of the City of Birmingham Pharmaceuticals, 1888 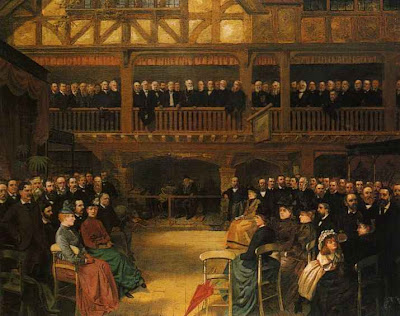 The present work shows Sir Thomas Barclay and members of Southalls and William Spencer & Sons and includes may exact portraits of the firm's directors and their families. Sir Thomas Barclay, Kt JP, leans against the depiction of 'Ye Apothecary's Laboratorie - Southalls' in the centre. He was the prime mover for piping fresh water from the Welsh mountains to Birmingham and thereby virtually eradicating cholera and typhoid from that city where epidemics had raged in the 19th century. He was also a Liberal councillor for Birmingham. The Lord Mayor of Birmingham and many city fathers stand on the balcony in the background.

George H. Bernasconi was a member of a Birmingham family of artists and exhibited in both London and Birmingham.
at 6:00 AM