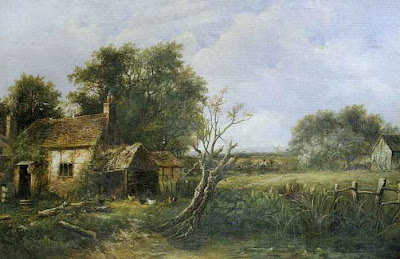 oil on canvas
.
http://www.artnet.com/artist/16616/joseph-thors.html
(including artworks currently for sale)
http://www.bridgemanartondemand.com/art/105956/Pond_with_Ducks_and_Farmhouse_Beyond
fl. 1863 - 1884
Joseph Thors lived and worked in London, though he spent a considerable time in the Midlands. He was a member of the Birmingham School, along with W H Mander and David Bates.Thors exhibited in London, at the Royal Academy and the Royal Society of British Artists, Suffolk Street. He also exhibited in Birmingham from 1869 - 1900.Joseph Thors painted landscapes, or rustic scenes with cottages, figures and animals. Although Thors belonged to the Birmingham School his choice of subjects and treatment of them was more akin to the Norwich School of Artists, whose work he much admired.
at 6:00 AM