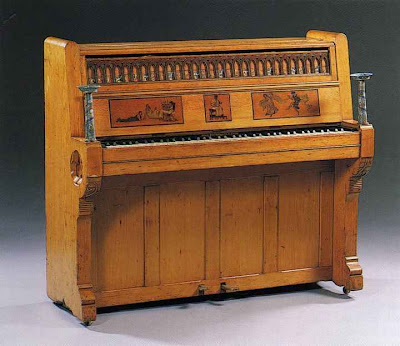 John Broadwood & Sons, with decoration by Sir Lawrence Alma Tadema
Cottage Piano, circa 1880
yew casing, the hinged top painted with words and music to 'Summer is I cumen in', the upright front with emroidered panel behind carved colonnade, above three rectangular panels inset with painted and tooled leather depicting flowers and insects, the underside of the keybourd cover painted with three scenes depicting music and dance, the keyboard flanked by two polychrome cloisonne enamel pricket candlesticks, the frame carved with a brass and treble clef.
keyboard with gilt mark 'John Broadwood & Sons', the case with branded mark '41249'.

This charming upright piano was made to Alma-Tadema's own design and specification by the famous pianomaker John Broadwood & Sons in 1873, for use by his family in
Townshend House, their house overlooking Regent's Park. The piano was returned to Broadwoods in 1874 for repairs following the disastrous explosion that virtually destroyed Townshend House (caused by a canal barge loaded with gunpowder blowing up on the Regent's Canal). Also in 1874 Alma-Tadema painted the three decorative panels which were attached to the inside of the keyboard lid. Further ornamentation of the piano case took place in 1876, again by Broadwood. In 1884 the Alma-Tadema family moved to Grove End Road in St John's Wood, taking the piano with them. That it was a prized and admired possession is testified by its having been included in the 1880s both in the retrospective exhibition of Alma-Tadema's own works at the Grosvenor Gallery and an exhibition devoted to musical instruments and inventions at the Albert Hall. A design for the piano was included in the Royal Academy summer exhibition of 1887.

The piano remained in Alma-Tadema's possession to the end of his life. It was subsequently in the private collection of Lord Leverhulme, but was not included in his bequest to the Lady Lever Art Gallery, Port Sunlight. At some later date the three panels showing musicians were removed and sold separately. Fortunately, the instrument and painted panels have recently been put together again making complete again this remarkable and fine example of artistic furniture decoration.