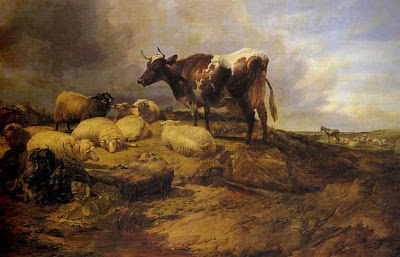 1854
oil on canvas
Cooper was influenced in his work on cattle by the Belgian painter Verboeckhoven and the Dutch painters Cuyp and Potter. Cooper exhibited at the RA from 1833 till the year of his death in 1902, a remarkable record. His reputastion for animal painting was such that both Creswick and Frederick Richard Lee both asked him to introduce animals into their own landscape works. He made good money from his paintings and set up both a museum and School of Art in the row of cottages in which he had been born in Canterbury.
This particular painting was exhibited in the West Room of the RA in 1854 and was recognised as one of his best works. It is a big painting 47 3/4 x 76 inches. It was bought from the exhibition by a Mr Hewitt, an art dealer from Leamington.
http://myweb.tiscali.co.uk/speel/paint/cooper.htm
at 6:00 AM