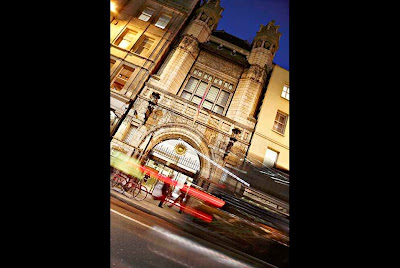 LONDON.- A remarkable architectural gem that sits between the City of London and Spitalfields will be unveiled in June this year, restored to its former glory. Built in 1895, Bishopsgate Institute was designed by Charles Harrison Townsend who went on to design the Whitechapel Gallery and the Horniman Museum. The Institute’s extensive refurbishment includes the complete restoration of the grade II* listed building’s spaces including the Great Hall and the building’s façade, and the creation of a new cafe. This follows on from the refurbishment of the Institute’s library, completed in 2010.

An independent body, Bishopsgate Institute has been providing welcoming and inspiring spaces for people with a thirst for knowledge since 1895. Through its library, historic collections, courses and cultural events, it enriches, entertains and stimulates independent thought.

The Institute has planned a week of events starting on Monday 27th June to mark the completion of the two-year renovation project which will culminate in an Open Day of around 20 events on Saturday 2nd July. Talks by writers such as Iain Sinclair and Dan Cruickshank will be complemented by free lunchtime taster sessions in wine tasting, film studies, sketching, rock’n’roll dancing and other courses that the Institute offers year round. There will be concerts and outdoor events in nearby Bishops Square and tours of the building and its library will be offered daily.

Throughout the summer and curated in collaboration with writer and broadcaster Robert Elms, London in Peril is a series of talks and discussions examining the past, present and future threats to the city. From revolution to terrorism, gentrification to expansion, crime to protest, London in Peril will look at the impact of all these issues and more. A series of literary talks about London books such as May Day, Absolute Beginners and The Child of the Jago will run alongside the debates.

History of Bishopsgate Institute
Since first opening its doors on New Year's Day 1895, Bishopsgate Institute has been a centre for culture and learning. The original aims of the Institute were to provide a public library, public hall and meeting rooms for people living and working in the City of London. The Great Hall in particular was 'erected for the benefit of the public to promote lectures, exhibitions and otherwise the advancement literature, science and the fine arts'.

Bishopsgate Institute was built using funds from charitable endowments made to the parish of St Botolph without Bishopsgate. These had been collected by the parish for over 500 years, but a scheme agreed by the Charity Commissioners in 1891, enabled these to be drawn together into one endowment. Reverend William Rogers (1819-1896), Rector of St Botolph's and a notable educational reformer and supporter of free libraries was instrumental in setting up the Institute and ensuring that the original charitable aims were met.

Architecture
Pevsner wrote of Charles Harrison Townsend that his designs of the 1890s ‘are without question the most remarkable example of a reckless repudiation of tradition among English architects of the time’. Similar in spirit to the experimental buildings of the Art Nouveau, they were certainly noticed and admired by Continental contemporaries. Townsend had won a limited competition for the building because of his skill as a planner, as the site was particularly awkward. Long and thin, it stretched eastwards from bustling Bishopsgate into Spitalfields, then one of the most deprived and depraved parts of the capital, where the Jack the Ripper murders had recently taken place. Yet Townsend contrived three entrances, a library and several meeting rooms connected by a long corridor, together with a surprisingly large Great Hall, ‘to promote lectures, exhibitions and otherwise the advancement of literature, science and the fine arts’.

Townsend’s designs for the front of the buildings led Pevsner to call the Institute ‘one of the most original buildings of its date in London’. The style, as with so much work of the 1890s, is essentially free Tudor and may have been inspired by the frontispiece of 16th-century Brereton Hall in his native Cheshire. Progressive as he may have been, he never forgot the necessity for integral ornament to symbolise and humanise. Much of the external terracotta is moulded into a dense tangle of leaves and branches illustrating the Tree of Life. But what is evident above all, particularly with the giant entrance arch resting on pairs of small squat columns, is Townsend’s deep interest in romanesque art.

The Great Hall is an excellent early example of the Arts and Crafts movement, with a unique glass lantern ceiling and an impressive sense of space created through the placing of large cross-beams. The refurbishment will return the glass lantern to its former glory - the lantern had been obscured by acoustic tiles since the 1960’s. Air cooling, a new lighting system, new flexible seating and a new state-of-the-art acoustic sound system will all be installed. Historically BBC Radio 3 used the Great Hall for recordings, and the composer Sir Edward Elgar conducted a concert in the space in 1927. Sir Ernest Shackleton used the Great Hall in 1910 for a lecture following his famous Arctic exploration and Sir Paul McCartney performed in the Great Hall in 1997.

The Bishopsgate Institute Library opened as part of the main Institute building and is home to some of the best collections in the world dedicated to the history of London and the labour, co-operative, freethought and humanist movements. Notably, the library does not require membership and is open to all.

Key collections held in Bishopsgate Institute Library archive include The London Collection, The British Humanist Association Collection and The Co-operative Collection. It also holds number of archives from unique sources such as James Ince and Sons Umbrellas Ltd, the National Miners support network and the Committee for Freedom in Mozambique, Angola and Guine.

As well as providing a rich resource for academics and members of the public interested in national and local history, the library also welcomes writers such as Iain Sinclair and Dan Cruickshank who have used the London Collection for their research. The new learning room provides a dedicated area for schools and the community to explore the Institute’s vast collections in a welcoming environment.