The Football Match by L.S. Lowry is Expected to Realise in Excess of £3.5 Million at Christie's 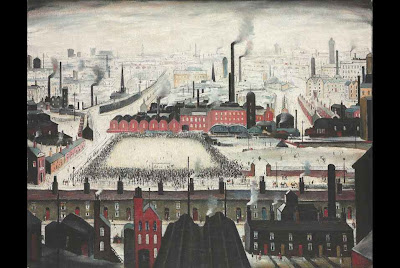 LONDON.- Having not been seen in public for almost 20 years, The Football Match, 1949, by Laurence Stephen Lowry, R.A. (1887-1976) will be offered at auction on 26 May 2011 in Christie’s sale of 20th Century British Art. An exceptionally rare depiction of one of Britain’s most popular sports - football - by one of the country’s most iconic British artists, this painting is a modern masterpiece. The property of a Private Collector, The Football Match has an estimate of £3.5million to £4.5million, setting a new benchmark for the artist’s work at auction.

Philip Harley Director, Head of 20th Century British & Irish Art, Christies London and Rachel Hidderley, Christie’s International Specialist and Director, 20th Century British Art: “ ‘The Football Match’ by L.S. Lowry is the ultimate work for passionate connoisseurs of Lowry’s work and of football. Having not been seen on the open market for almost 20 years, Christie’s is proud to provide an international platform for this masterpiece in May. The large-format, panoramic, birds-eye composite view of Lowry's own landscape perfectly captures the spirit and drama of a town gripped by the excitement of the Saturday football match. The empty streets peopled only with occasional women, prams and shoppers contrast the busy crowd watching the football match. The artist warmly captures a Northern town relaxing during a week-end, following a busy working week, which he depicted so often in his revered industrial scenes.”

Reflecting the international appeal of Lowry, The Football Match - which was painted in 1949 at the high point of the artist’s career - toured to London, America and Paris before entering a private collection in 1950, where it remained for over 40 years. This large format canvas, measuring 28 x 36 inches, is in excellent original condition. It provides collectors, institutions and dealers with a very rare opportunity as it combines the artist’s highly sought after industrial landscape, peppered with rooftops; chimneys full of billowing smoke; spires; houses and streets scenes with incidental domestic moments, and teams this with magnetically pulling the viewer over the rooftops, through the deep crowds gathered on the side-lines, through the goalpost and into the midst of the football match itself, and then beyond.

Lowry was a keen football supporter himself, his team was Manchester City. He explored the subject of going to, or being at a football match, several times, but no other work provides this engaging panoramic birds-eye view deep in to the action on the pitch, through such extensive crowds, with the greater, highly detailed context of the homes and factories, flanking all four sides of the pitch, which are central to the livelihood of the supporters depicted