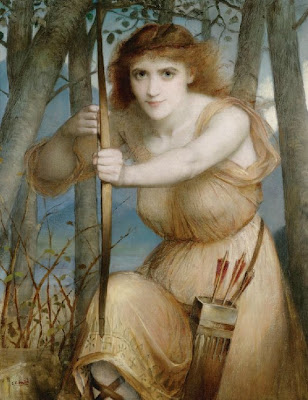 Charles Hallé was the son of the pianist and conductor Carl Hallé (later Sir Charles Hallé). He trained as an artist
under Baron Marochetti and L. von Mottez and commenced as an exhibitor – principally of portraits – at the Royal
Academy in the late 1860s.
In the autumn of 1875 discussions between Hallé and Sir Coutts Lindsay focused on how a new exhibition space
could be created in which works of art by the advanced circle of painters associated with the Aesthetic movement who were then particularly dissatisfied with the Royal Academy as a place to display might be shown more sympathetically.

In the first place Lindsay offered to pay the rental on a temporary exhibition space, but in due course the idea of a permanent gallery emerged. Hallé was recruited by Lindsay to find suitable premises, and also to determine which artists might be ready to participate. The Grosvenor Gallery, occupying a newly constructed building in London's New Bond Street, opened in May 1877. Hallé and Joseph Comyns Carr had day-to-day responsibility for the running of the Grosvenor, and were invaluable as assistants to Lindsay because both men were familiar and well-liked figures in the London art world and therefore in a good position to canvass the support of painters who might be invited to exhibit.

From the start Hallé exhibited his own works in the Grosvenor summer exhibitions. Walford Graham Robertson remembered him with affection and admiration: 'Hallé was certainly an artist; he loved art truly and well and served her faithfully' (Time Was, London, 1931, p. 46).

The Grosvenor allowed the works of a number of progressive artists to be seen and appreciated, notably those of Edward Burne-Jones, George Frederic Watts and James McNeill Whistler – all painters who had made up their minds to abstain from the Royal Academy summer exhibitions. However, over the years that followed there were ever increasing difficulties and disagreements among the people involved in the management of the gallery, exacerbated by the financial problems that Lindsay faced after the failure of his marriage to Blanche Lindsay. In 1887 Hallé and Carr left the Grosvenor to set up their own gallery, to be called the New Gallery and which operated from a space in Lower Regent Street.

The New Gallery was even more remarkable as a pioneering exhibition space adapted to the sensibilities of the artists themselves and in which works might be seen to advantage than the Grosvenor had been. Summer exhibitions of new works by contemporary artists whose Hallé and Carr regarded as interesting and worth promoting took place in May of each year, while in the winter they held exhibitions of historical works and retrospectives and memorial exhibitions.

The most important of these were the displays of works by Burne-Jones, in the winter of 1892-3, and G. F. Watts, in 1896-7. In 1897-8 an exhibition of works by Rossetti (who had always resisted invitations to see his works included in either the Grosvenor or New Gallery exhibitions in his lifetime) was held, and in 1898-9, a memorial exhibition of works by Burne-Jones.Hallé's own style of painting – of which The Archer is a fine example – represents a hybrid of the aesthetic figurative style of Burne-Jones tinged with theatrical classicism of the type led by Lawrence Alma-Tadema. Although not identified as the subject of the painting in its title, the work appears to show Diana, the virgin huntress and goddess of the Moon. Hallé may have had in mind one of the familiar mythological episodes in which Diana is the protagonist, for example the Death of Actaeon or the punishment of Callisto. Diana stands as a symbol of womankind's independence from men, and woman's desire for revenge against abuse suffered at the hands of men. Therefore, the menacing way in which the goddess seems to advance upon the spectator was perhaps a deliberate motif which may have seemed apposite at a time shortly before the Great War when the militant feminist suffragette movement was mounting in strength.