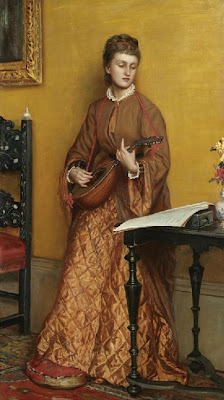 'Socially, Val Prinsep was a universal favourite: he was Millais' intimate friend and his circle included Watts, Leighton,
Burne-Jones, William Morris, Rossetti and Gêrome, Du Maurier, and Whistler, a galaxy of genius, and he was loved of
all - indeed, he had a faculty for making and keeping friends.' (Vanity Fair, 1904, quoted by Paul Saville, Val Prinsep
RA (1838-1904): A Jubilee Painter, 1977, pp. 1-2)

Valentine Cameron Prinsep was born on Valentine's Day 1838 in Calcutta, the son of a distinguished civil servant, Thoby Prinsep. His mother Sarah, was one of the celebrated and beautiful Pattle sisters and his maternal aunts were Virginia, Countess Somers, beloved by George Frederick Watts and Julie Margaret Cameron the famous photographer. In 1843 the Prinseps returned to England and took the lease of Little Holland House in Kensington in 1841. Their home was one of the most lively artistic 'salons' of the period, frequented by many of the political, scientific and artistic celebrities of the day. It was Watts who encouraged the young Val (as he was known) to become a painter and give him his earliest training. By 1857 Val was collaborating with Rossetti and Burne-Jones on perhaps the most decorative scheme painted by the Pre-Raphaelites, the murals for the debating hall of Oxford Union. His next association was with Whistler and Poynter in Paris where they studied together in the atelier of Charles Gleyre and it was here that another fellow student George du Maurier immortalised Prinsep as the character Taffy in the novel Trilby. Prinsep moved to Holland Park in the 1860's and came under the influence of Leighton and was elected an Associate of the Royal Academy in 1879, a year after Leighton became the President.

The ebony chair inlaid with ivory was almost certainly a souvenir from Prinsep's time in India; he went there in 1876 to paint a large portrait group of the Imperial Durbar at Delhi. The eclectic mix of blue-and-white china, golden painted walls and exotic furniture exemplify the decorative tastes of the Aesthetic Movement of the 1870s, led by Rossetti, Whistler, Moore and Walter Crane. The theme of female musicians practicing in exotic interiors was a favourite subject for all of the members of the Aesthetic Movement and it is easy to bring to mind similar paintings by Rossetti and Simeon Solomon. Prinsep married the daughter of the wealthy art collector Frederick Richard Leyland who owned a fine collection of Pre-Raphaelite and Aesthetic paintings. As Frank Gibson pointed out in the Dictionary of National Biography; 'Prinsep possessed versatile accomplishments, social gifts, great physical strength, and after his marriage ample means...' and Val and his wife Florence moved to a fine Philip Webb house on Holland Park Road, in the heart of the Aesthetic cliche. Another example of Prinsep's work in this vein is the large picture Leonora di Mantua of 1873 (Walker Art Gallery, Liverpool) which depicts a similarly opulently dressed woman holding a peacock-feather fan.
at 1:00 PM