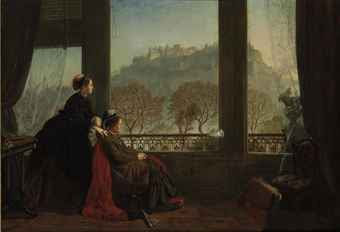 This striking composition by Drummond, by then curator of Edinburgh's National Gallery, commemorates the granting of the Freedom of the City in 1874 to Angela Burdett Coutts, described by King Edward VII as 'after my mother, the most remarkable woman in the kingdom'. The youngest daughter of Sir Francis Burdett, 5th Bt., and his wife Sophia Coutts, she inherited three million pounds from Harriot, Duchess of St. Albans, who had previously been married, when an aspiring actress, to her grandfather, the banker Thomas Coutts. Resolutely single, until she married a twenty eight year old at the age of sixty seven, Burdett Coutts spent her fortune on a variety of good causes both at home and abroad. Queen Victoria made her the first woman to be granted a peerage in her own right. She was buried in Westminster Abbey.

Her inseparable companion for fifty two years was her former governess, Mrs Brown, 'the sunshine of my life'. Edna Healey in her acclaimed biography delicately suggests that there was 'an element in the close attachment ... that a post Freudian observer would see as sexual' but the couple would have been 'happily unaware' of such a notion. Their likenesses are preserved in stone in statues flanking the gateway to Holly Village, a model development they built in Highgate to act as an eye-catcher from their house, Holly Lodge. On Mrs Brown's death in 1878 the Baroness received letters of condolence from Queen Victoria, Empress Eugenie, and the King of the Belgians. Few Victorian governesses were so fêted or mourned.

It is remarkable how their relationship was so widely accepted in Victorian society, in contrast to the opprobrium that greeted the Baroness's later marriage.
at 6:00 AM