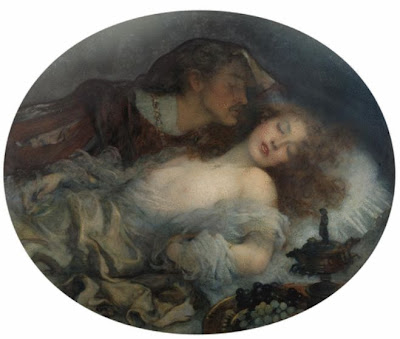 They told her how, upon St. Agnes' Eve,
Young virgins might have visions of delight,
And soft adorings from their loves receive
Upon the honey'd middle of the night,
If ceremonies due they did aright;
As, supperless to bed they must retire,
And couch supine their beauties, lily white;
Nor look behind, nor sideways, but require
Of Heaven with upward eyes for all that they desire.
(John Keats The Eve of St Agnes, verse vi.)

Keats famous poem was written in 1819 and published in 1820. It tells the story of Madeline and Porphyro, whose love is forbidden due to a feud between their families. Having heard the legend of St Agnes, patron saint of virgins, Madeline resolves to follow the 'ceremonies' that promise dreams of her beloved Porphyro. She duly retires to her chamber without supper, and lies on her back not looking behind her or sideways and awaits her dream.

Unbeknownst to her, Porphyro has risked his life by secreting himself in to her bedroom with the assistance of her aged maid, Angela. Madeline awakes to find Porphyro gazing upon her beauty, making her dream a reality. While her family are distracted by the drunken revels of the feast of St Agnes she and Porphyro make their escape.

Comparatively little is known of Peter Hay. He was born in Edinburgh and studied at the Royal Scottish Academy Schools and the Academié Julien in Paris before settling in London. The choice of subject for the present picture was probably influenced by Sir John Everett Millais' Madeline Undressing (The collection of Her Majesty Queen Elizabeth II) which was exhibited at the Royal Academy in 1863 (no.287) and William Holman Hunt's The Flight of Madeline and Porphyro during the Drunkenness Attending the Revelry (Guildhall Art Gallery, Corporation of London) exhibited at the Royal Academy in 1848 (no.804). Belonging as he does to a later generation of artists, Hay presents a more overt eroticism in his painting of sexual longing.
at 6:00 AM