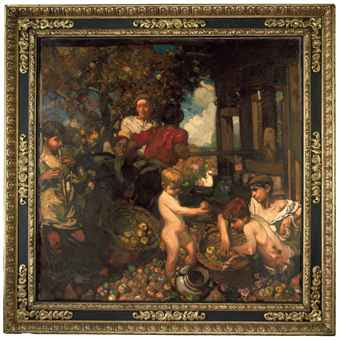 A painting redolent of the Old Masters, autumnal in colour and spirit, with a wonderful sense of light flickering through the central window of sky. Unusually for Brangwyn he appears to indicate a romantic yearning for the glories of rural England. The work has been highly praised by critics, Rinder describing it as a 'robust idealisation of an incident charged with beauty and with significance' considering it a 'noteworthy attempt to express the half-triumphant, half-sad sentiment of October'. Marion Spielman described the painting as 'one of [Brangwyn's] most opulent designs, such as Titian might rejoice in could he come to life in the twentieth century' whilst the Studio critic noted that it was 'masterly in handing and sumptuous in colour'. Seeing the work gracing the walls of Horton House, Winterbottom's home, Furst recalled 'the beautiful early rich and mellow Cider Press which alone would secure to its author a place amongst the Great Masters'. The work appealed vastly to the Japanese earlier this year - becoming the signature painting for the exhibition.

According to Macer-Wright, East purchased the work for £300 to help the younger artist out of financial difficulties, but the claim cannot be substantiated. Brangwyn borrowed the work from East to lend to an exhibition in Munich, but apparently the packing case was destroyed when on the docks in Tilbury. East recovered the canvas, had it relined and restored and it subsequently sold for £1,400.

We are grateful to Libby Horner for her help in preparing this catalogue entry.
http://www.christies.com/lotfinder/sir-frank-brangwyn-ra-the-cider-press/5396393/lot/lot_details.aspx?pos=3&intObjectID=5396393&sid=&page=5
at 1:00 PM