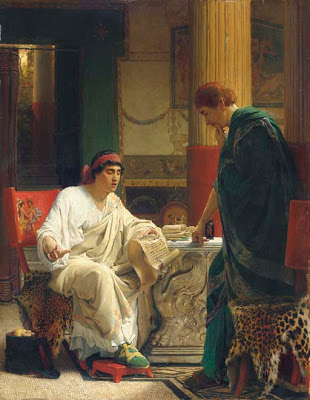 The present picture, Vespasian hearing from one of his generals of the taking of Jerusalem by Titus, has been known by the various titles Reading, La Lecture, and The Dispatch.

It depicts Vespasian, The Flavian Emperor, listening as one of his generals reads a dispatch from his son Titus, who has just overrun Jerusalem in AD 70. The positive identification of Reading (the title used by Dircks, and supported by opus no. and date, in his formative article, 'The later works of Lawrence Alma-Tadema', Art Journal, December 1910) with La Lecture (Vosmaer's title) and The Dispatch (Grosvenor Gallery catalogue) has necessitated much research.

The Dispatch, the picture cited in the Grosvenor catalogue for the 1882-3 exhibition, was owned by Mariano de Murietta, the Marquis de Santurce. It was this same Marquis who sold a picture entitled Vespasian hearing from one of his generals of the taking of Jerusalem by Titus at Christie's in 1892. All the paintings by Alma-Tadema in the Marquis's collection (17 in total) have been accounted for except for The Dispatch and Vespasian. Since it is a dispatch that is being read to Vespasian, it is almost certain that the two paintings are one and the same.

However, in his annotated copy of the Grosvenor Gallery catalogue, Carel Vosmaer comments of no. 249: 'Bishop Venantius... is very beautiful'. Alma-Tadema painted only one picture of Venantius Fortunatus (1862), which was purchased by the Museum of Dordrecht in 1882. It seems that Vosmaer mistook the Gaulish general, reading his missive, for Fortunatus reading his poems.

We are grateful to Professor Vern G. Swanson of the Springville Museum of Art, Utah, for his help in preparing this catalogue entry.
http://www.christies.com/lotfinder/sir-lawrence-alma-tadema-om-ra-vespasian-hearing/4387766/lot/lot_details.aspx?from=salesummary&pos=3&intObjectID=4387766&sid=aeacdba7-a583-4535-a522-1fcd6a28fdd4&page=3
at 1:00 PM

I have been talking to students a great deal about Alma-Tadema in the last fortnight, making the point that his languorous women and pink rose petals were hugely popular in the late 19th century. But his famous men seem rarer.

No wonder. You noted that he painted only one picture of Venantius Fortunatus (1862), purchased by the Museum of Dordrecht in 1882. Were there others?

I don't think so Helen - not that I know of.