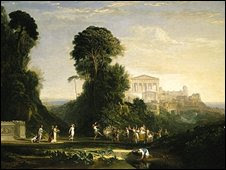 A Turner landscape has fetched £9.1m ($12.9m) in an auction at Sotheby's in New York.
The Temple of Jupiter Panellenius, an oil landscape, achieved the second highest price ever for a painting by the British master.
The painting was secured by an anonymous telephone bidder.
It is one of only three made by Joseph Mallord William Turner which depict ancient Greece and was first exhibited in 1816.
It features an ancient Greek scene of figures dancing a national dance with a temple in the background.
http://news.bbc.co.uk/1/hi/entertainment/arts_and_culture/7859661.stm
at 5:00 PM