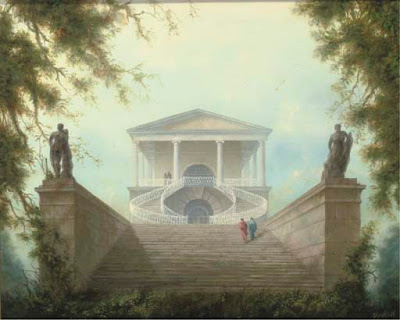 signed and dated 'Felix Kelly 86' (lower right)
oil on panel
18 x 22 in.
Price Realized £9,600
Tsarskoye Selo is one of the numerous Imperial estates situated to the south of St. Petersburg, and was particularly beloved of Catherine the Great. The Cameron Gallery was her favourite wing, commissioned in the Neo-Classical taste from the Scottish architect Charles Cameron, and built between 1781-1786.

This whimsical depiction of the building is typical of the work of Felix Kelly 1917-1994, the New Zealand born painter who was perhaps the foremost recorder of classical architecture in the 20th Century. Rigorous architectural authenticity was combined with romance and mystique, a combination many owners of houses in England and America found irresistable. Kelly travelled widely, and executed commissions in Russia, India, the Far East, north Africa and the Caribbean.
at 6:00 AM