Six Million Pounds of Victorian Paintings to Be Offered at Christie's 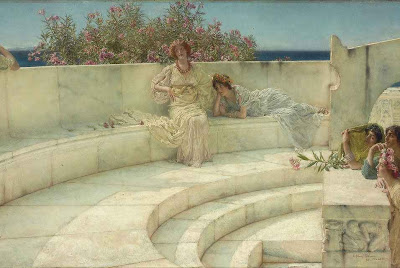 LONDON.- The vitality of the market for Victorian & British Pictures including Drawings & Watercolours continues to gain notable momentum, as demonstrated by the multiple world auction records set at the December 2009 sale where ‘spirited bidding from buyers swept up with Victorian values’ was reported in the press. The summer 2010 sale at Christie’s London, on Wednesday 16 June, will meet the renewed vigor of demand with one of the strongest sales of its type to be offered on the international auction platform for many years. With estimates ranging from £3,000 to £1.5 million, the sale is expected to realise in the region of £6 million. This auction follows the morning sale of the Nicolette Wernick Collection of British Watercolours & Paintings (1800-1950).

Sir Lawrence Alma-Tadema, one of the great exponents of High Victorian classicism, is known to have worked on Under the Roof of Blue Ionian Weather (estimate: £1,000,000-1,500,000) for over two years, as a commission for the financier Ernest Cassel. The title is adapted from Shelley’s ‘Letter to Maria Gisborne.’ A remarkable work, of museum quality, this painting illustrates Alma-Tadema’s sophisticated technique coupled with considerable archaeological knowledge. Bathing the viewer in glorious sunshine, the generous sweep of marble benches with reclining sitters against an azure sea and sky, imbue a sense of infinite beauty and tranquility which is irresistible. It received extensive critical acclaim when it was first exhibited at the Royal Academy in 1901, as a pendant to Poynter’s Helena and Hermia.

Chloe, 1893, by Sir Edward John Poynter (estimate: £600,000-800,000) is regarded as one of the artist’s masterpieces. It was exhibited at the Royal Academy in 1893, three years prior to Poynter’s appointment as President of the R.A., following the deaths of Leighton and Millais in quick succession. It is an exercise in Aestheticism, whereby no particular story, point, or moral, is conveyed. Instead, this highly decorative work evokes atmosphere and depth through the rich tapestry of colours, textures and compositional balance, which is further enhanced by the graceful elegance of the sitter and the presence of music in the form of pipes, a lyre and a small bird.

Offered for sale by The Royal Institution of Cornwall Museum, Truro, The Sea Maiden by Herbert James Draper is an extraordinary painting, which was the artist’s most ambitious work to date and his first popular success when it was shown at the Royal Academy in 1894 (estimate: £800,000-1,200,000). The artistic process on which Draper embarked with this work was a true journey. Having conceived the design in Rome in 1890, he planned the composition down to the very last detail and made numerous studies which are recorded photographically. The studies for the background were made in the Scilly Isles and Devon, where Draper even joined a fishing trawler at sea to directly observe the nets being hauled in; he went on to make a model of the boat to examine the way that it caught the light. An artist who was highly regarded by the established masters of the time, Draper received advice from Frederic, Lord Leighton, the President of the Royal Academy, to avoid too much realism and instead concentrate on maximising the power of the composition.

This work belongs to the genre of mermaid subjects that figures so prominently in Victorian art, including Sir Edward Coley Burne-Jones’ The Depths of the Sea, 1886 and J. W. Waterhouse’s The Siren, 1900. A theme which appealed to both the Romantics and the Symbolists, it is unusual that Draper’s sea maiden has no fishtail, a decision which he credited as being guided by the authority of the poet Swinburne and his work Chastelard (1865).

Sir George Clausen was one of the leading British Impressionists; his pastel Head of a young girl (Rose Grimsdale), 1890 (estimate: £250,000-350,000) is a rare and particularly beautiful example of his oeuvre. Like many other artists of his generation, Clausen was fascinated by the romantic idea of the human spirit soaring at the sound of the lark. This was a period when children in rural areas were taught to read the sky and the movement of birds was viewed as a vital clue to what may happen to untended crops and livestock. Perhaps this is why this arresting child is looking upwards with the extraordinary intensity of youthful innocence; her striking freshness of complexion illustrating Clausen’s masterful handling of the medium. A keen student of Degas’ work, the light, colour, composition, style and subject matter of this work on paper combine to produce one of the most charming Clausens to feature at auction in recent years. This sale features a total of four works by the artist, including his captivating painting The Morning Walk, 1881 (estimate: £100,000-150,000).

Throughout his celebrated artistic career, Henry Herbert La Thangue focused on rural idylls in England and around Europe, utilising local people as models. In 1904, having painted in the hill villages of Provence for two years, he went on to explore the untouched Italian coastline of Liguria. Ligurian Grapes (estimate: £200,000-300,000), is part of a monumental sequence of four works which began around 1905 with a picture of an orange seller, that was possibly painted on the same coastal road. Making Ligurian Lace provides the strongest echoes to the present lot, as it depicts the same young woman working alongside her companion. The pictures were shown together at the Royal Academy in 1907, where they were warmly regarded as being particularly strong works.

I don't understand. Our dollar is going down, unemployment is creeping up and the economy of most of Europe is taking a pounding. If the recession is as awful as everyone expects, how are those prices to be achieved?

If money wasn't an object, I would buy the very beautiful, languid Alma-Tadema. But how wide is it? It may not fit onto my lounge room wall.

If you can find a copy of our Sunday Times Rich List its obvious the recession has not hit most of the rich at all, and these are really investment paintings. At the moment (though it may change) our capital gains tax make it worth investing in such objects.