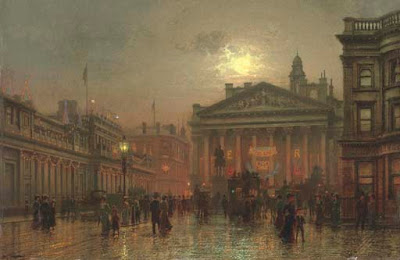 signed 'Louis Grimshaw' (lower left) and further signed,inscribed and dated 'The Royal Exchange. Louis Grimshaw 1903' on the reverse
oil on board
12 x 18 in.
Price Realized £45,600

Grimshaw's depiction of the Royal Exchange illustrates the animated coronation celebrations for Edward VII. The ceremony was intended to be on the 26th June 1902 at Westminster Abbey but the future King suffered an untimely attack of appendicitis the day before and the event was postponed. The coronation eventually took place on the 9th August 1902 in London and festivities were resumed, as is evident in the present work.