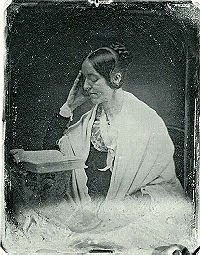 Sarah Margaret Fuller Ossoli, commonly known as Margaret Fuller, (May 23, 1810 – July 19, 1850) was a journalist, critic and women's rights advocate associated with the American transcendental movement. She was the first full-time female book reviewer in journalism. Her book Woman in the Nineteenth Century is considered the first major feminist work in the United States.