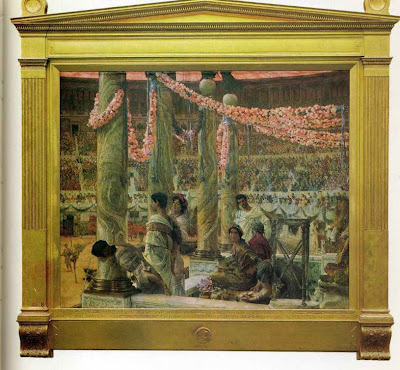 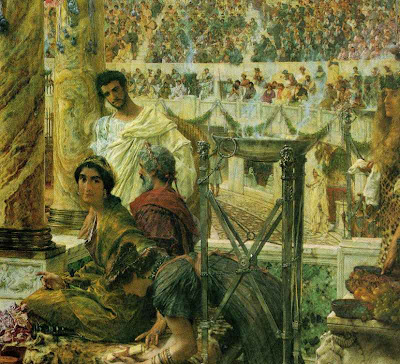 signed and numbered CCCLXXXII
48.5 x 60.5"
the frame was designed by the artist

commissioned by Arthur Tooth & Sons, London, 1907
ntended to represent a gala performance given in the Flavian Amphitheatre by Septimus Severus on the occasion of his bestowing on Bassianus (nicknamed Caaracalla), his son by his fitst wife, the title of Antonius Caesar.
Septimus is shown in the Royal Box with his second wife, Julia Bomna. She had tried,unsuccesfully, to obtain the same honour for her son eta, who is shown at the front of the box between his two sisters. Caracalla is shown to the right of the Emperor.

The work was carefully composed and painted, Alma-Tadena counted 2500 spectators out of a total of 35,000 which he calculated the stadium could hold. It took nearly two years to paint (begun in 1905) and followed on from his The Finding of Moses (CCCLXXVII).
at 6:00 AM