Kate Hayllar - A Thing of Beauty is a Joy Forever 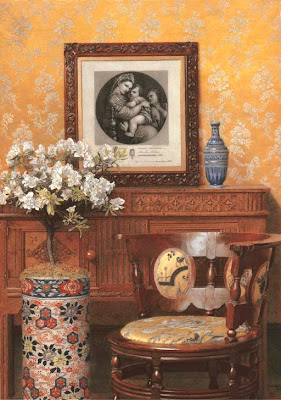 It is not difficult to see how she could have attracted such an important patron. The composition, though technically simple, is satisfying, and the execution superb. Kate Hayllar has assembled items then currently fashionable in every house of advanced aesthetic taste: a copy of Raphael's Madonna della Sedia is placed above an oak cabinet, beside an azalea in an imari vase. The exoticism of the east is conveyed through the vivid imperial yellow of the walls, while the chair is also upholstered with material featuring Japanese motifs.

Like her sister Jessica, Kate remained unmarried, and like her sister Edith she also gave up painting around 1900 when her family left Castle Priory, Wallingford, which had provided them with such a contented family life, and the inspiration for many of their paintings. She later became a nurse.

We are grateful to Christopher Wood for his assistance in preparing this entry.
at 6:00 AM