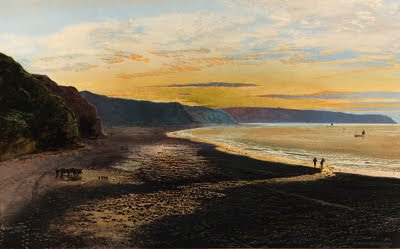 The present watercolour is a remarkably rare example of Grimshaw's work in watercolour, a medium that he used in an important experimental phase in his development but confined to the 1860s. There are no other known seascapes in this medium.

The photographic appearance of the watercolour reflects Grimshaw's keen interest in photography. It was not until late in 1890-93 that he became a member of the Leeds Photographic Society. In the 1860s Grimshaw was very influenced by John Ruskin and the critic's strict rules regarding visual accuracy also encouraged the use of photographs as a source for painting. The unusual light effects in some of the works produced by Grimshaw using photographs are a result of using more than one photographic source for a composition.

The patterns on the wet sand are particularly photographic in appearance and the hard lines and shadows are similar to those in the rocks in the foreground of The Vale of Newlands, Cumberland, dated 1868, sold Christie's London, 11 July 1972 (800 gns.).

It was in 1867 that Atkinson Grimshaw painted his first moonlight scene, Whitby Harbour by Moonlight. Another watercolour of Whitby by Grimshaw dated 1868 is in the Pannett Art Gallery Whitby (see Atkinson Grimshaw, Leeds, 1979, op.cit., pl. 22).
at 6:00 AM