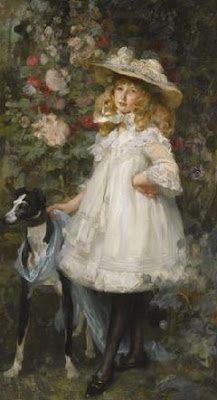 Shannon established a highly successful London portrait studio in the late nineteenth century and by the 1900s was considered by many a rival to John Singer Sargent. His expressive, painterly style and bold use of color effectively
captured the personality and fashion of his sitters. Though a mirror was an object common to artist's studio, Shannon employed it to unusual effect: he placed the glass behind him so that sitters could watch the progress of the painting (Brian Stewart and Mervyn Cutten, The Dictionary of Portrait Painters in Britain up to 1920,
Woodbridge, Suffolk, 1997, p. 418).
at 6:00 AM