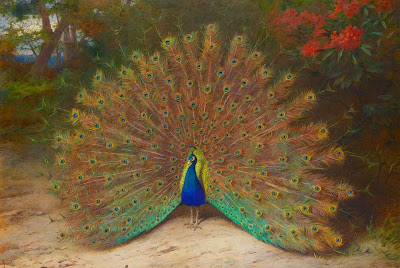 [Archibald Thorburn, Peacock and Peacock Butterfly, At 87.5 x 111.5cm. Estimate: £80,000-120,000. Photo: Bonhams] LONDON.- An outstanding private collection of 15 works by Archibald Thorburn will feature in the next 19th Century Paintings auction at Bonhams New Bond Street on 13th July 2011. This follows on from the success of Bonhams 19th Century Paintings auction in January, where Covey at Daybreak – Partridges sold for £192,000 – the second highest price ever paid for a Thorburn painting at auction. The highlight in the collection is the magnificent Peacock and Peacock Butterfly which is estimated to fetch £80,000-120,000. At 87.5 x 111.5cm it is one of the largest of Thorburn’s paintings, and it shows a large peacock proudly displaying his extravagant plumage, in contrast to the delicate and beautifully detailed peacock butterfly in the foreground. Hugh Gladstone wrote in Thorburn’s obituary in the Scottish Naturalist, January 1936, “of all his pictures...the most daring was a gigantic one...of a peacock in full display in front of a red rhododendron in full bloom; a gorgeous sunset and woodland as the background...I remember the whole as a riot of colour...both magnificent and accurate.” Thorburn later recalled how he had nightmares of endlessly painting the ‘eyes’ on the peacock tail feathers. Also expected to prove popular with bidders is Danger aloft – Ptarmigan. Nine ptarmigan are seeking shelter on a hillside while storm clouds gather in the distance. There is a small herd of deer on the shoulder of the hill and “suddenly, out of the mists boiling up from the depths of the corrie, a golden eagle appears and the ptarmigan instantly crouch and ‘freeze’, their autumnal plumage blending to perfection with the boulders and herbage of this high place. They squat motionless, trusting in their camouflage for survival, waiting for the danger to pass.” (Thorburn’s Landscape). Bonhams hold the record for the highest price paid for a Thorburn ptarmigan painting at £72,000, and this work has attracted a pre-sale estimate of £70,000-100,000. The works on offer from this collection showcase Thorburn’s mastery of a range of birds in different landscape settings and weather conditions. They have lustrous, meticulous feathers, his gorse bushes are prickly and detailed and his water shimmers in the sunlight. Examples include Woodcock in the snow (£20,000-30,000), Widgeon and teal by the waters edge (£20,000-30,000), Blackcocks at the Lek (£40,000-60,000), On the Stooks – Blackgame (£40,000-60,000) and Pair of Golden Eagles (£15,000-20,000). Among the works in the collection are several paintings which were brought in the Thorburn Museum sale in 1993. The total estimate for the whole collection is £400,000. Charles O’Brien, Head of 19th Century Pictures at Bonhams comments, “We are really thrilled to be handling this magnificent collection which has been put together with meticulous care over a number of years. Thorburn’s work remains at the very pinnacle of British ornithological art and the remarkable prices paid by collectors recently are testament to the enduring quality and popularity of his work.” Thorburn (1860-1935) was a Scottish artist with a life-long love of birds and was Vice-President of the RSPB. He was highly skilled at producing accurate renderings of British wildlife, with the many species of bird forming a staple subject. Ptarmigan, partridge, grouse and pheasant were often painted from life during Thorburn’s countless jaunts through the countryside and during his long career. He gained a strong reputation among the great sportsmen of the day, including Edward VI and George V, for his accuracy and attention to detail with regard to the form, colouring and the plumage of the various game birds. Between 19-21 April selected Thorburn highlights from the sale will be on view in the Edinburgh saleroom: 22 Queen Street, Edinburgh, Scotland EH2 1JX. http://www.artdaily.org/index.asp?int_sec=2&int_new=46282
at 1:00 PM