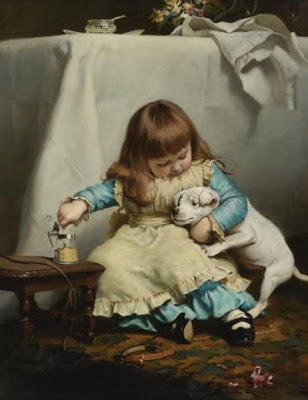 signed C. Burton Barber and dated 1885 (lower right) oil on canvas 36 1/4 by 28 1/4 in. London, Royal Academy, 1885, no. 1120 London, Royal Academy, Summer Exhibition, 1886 The present work is one of Burton Barber's characteristically charming works of children and dogs. In his short life (he died at 49), the artist earned great popularity over his twenty-eight years of exhibitions at London's Royal Academy even drawing the attention of Queen Victoria who requested the artist paint the royal dogs. In particular, Once Bit, Twice Shy drew great acclaim upon its first exhibition in 1885. The Academy Notes considered the composition, hung among the works of less remarkable landscape artists, "a highly humorous incident not to be missed" (Blackburn, p. 16). The Times elaborated, naming Once Bit, Twice Shy "the most amusing picture in the Academy... It is a doubtful experiment to make an elaborate joke on canvas, but if the jokes are as good as this one there is much to be said for them" ("Royal Academy," p. 4). Set in a well appointed interior, a young girl sits neatly dressed in white pinafore over a vibrantly blue silk dress, foxterrier puppy in arm, one hand tucked under his chin while the other holds a silver spoon, digging deep into a mustard pot. The humorous tension of the moment was easily understood and appreciated by contemporary viewers. As a Royal Academy visitor explained: "the dog, as the title implies, has had the same experience before, and once is enough. But its young mistress has no idea of paying any attention to random protests, and is proceeding with perfect calmness to her duty. The contrast between her tranquil indifference and the ludicrous horror depicted on the face of the puppy is a pictorial triumph" ("Royal Academy," p. 4). Parents are rarely (if ever) present in Burton Barber's subjects, yet in the present work the carafe, empty wine glasses, and discarded cloth napkin suggest they have recently left the room —leaving their young daughter to her experiments. Despite the girl removing the puppy's belled collar, adult attention may not be avoided for long. In the darkened room, with its deep brown wood furniture and richly patterned carpet, light bounces across the tablecloth and spills over the girl's glossy auburn hair and the puppy's white coat, suggesting a door that has been reopened. Burton Barber's contrasting light effects adds to the theatricality of the scene, while his brilliant ability to capture the psychology of this subjects is evidenced in the detailed expression of the wary puppy and his tense posture as well as the young girl's studied, downward gaze and sweet if determined smile. Outside of the exhibition galleries, Once Bit, Twice Shy, like many of Burton Barber's mpositions, was likely well known through the wide distribution of prints and chromolithographs that were sold of his works.
at 6:00 AM