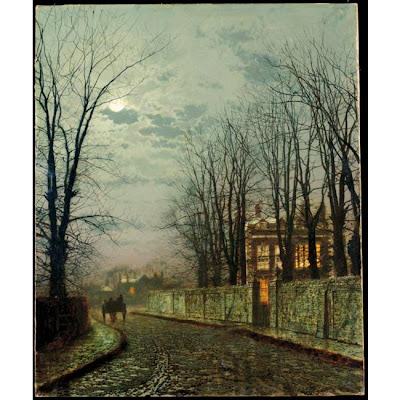 
John Atkinson Grimshaw had a middle class upbringing in Leeds. As a young man he worked as a clerk for the Great Northern Railway, painting in his spare time. Despite disapproval from his family (apparently his mother threw his paints into the fire), Grimshaw gave up his job in about 1861 in order to pursue a career as an artist. He met success quickly. He was an ambition artist who managed to be prolific whilst maintaining the attention to detail for which he is so admired. In 1862 he exhibited six paintings at the prestigious Philosophical Hall in Leeds, alongside works by Pre-Raphaelite artists such as William Holman Hunt and Dante Gabriel Rossetti. In the early years of his career he painted still lives and figure scenes as well as brightly lit landscapes. He mixed in artistic social circles with eminent literary figures and was influenced by the Pre-Raphaelites and Tissot as well drawing inspiration from Victorian writers and poets. Grimshaw’s work reveals his love of drama and romance and his paintings often evoke the atmosphere of Victorian literature. Grimshaw particularly admired Tennyson and gave some of his fifteen children (only six survived) Medieval names such as Arthur and Lancelot after the characters in Tennyson’s Idylls of the King. In 1874 he exhibited at the Royal Academy and his success at this time was so great the he was able to buy a second house in Scarborough, in addition to his home just outside Leeds.

The period of the 1880’s, from which this picture dates, was Grimshaw’s most prolific era and marks the stage when Grimshaw adopted the moonlight genre for which he is now renowned. In A Wintry Moon Grimshaw has captured a moonlit night in the suburbs as a man drives his horse and cart down the road. Our eyes follow the road round the corner and along to the houses with smoking chimneys at the end. The glowing warm light in the windows of the Victorian house in the foreground suggest the warmth and comfort of the house interior which contrasts with and the cold, damp and dark night. Thus Grimshaw creates an atmoshperic scene which combines the elegance of the trees, the grandeur of the buildings at night with a reflective quiet mood.
at 1:00 PM

I agree thank you.