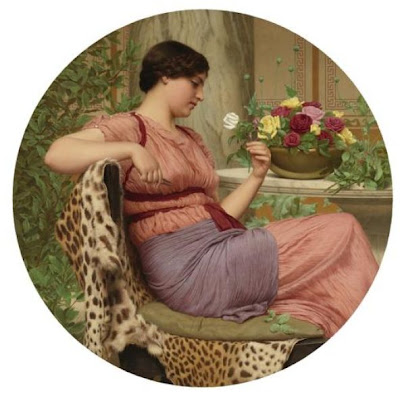 signed J.W. Godward and dated 1916 (lower left)
oil on canvas 30 1/2 by 30 1/2 in. (painted within a circle)
The Time of Roses is among Godward's most successful compositions. Every square inch of the picture plane contributes to this beautiful image of a Grecian woman in a sinuous draped gown, perched on a small chaise that is draped in a leopard's pelt. She holds a small pair of shears in one hand and a single white rose in the other –typically a symbol of honor and integrity and, in some cases, remembrance. As in all of his masterpieces, no element is spared the artist's meticulous, and even obsessive, attention to detail. Formally, the roundel lends itself perfectly to the seated subject and the careful arrangement of horizontal and vertical elements activate the whole composition. In discussing this painting, Vern Swanson adds that "the artist's deft handling of tonal and analogous color harmonies creates an effective image" (Swanson, p. 112). A painting such as this leaves no doubt that Godward was a master of his craft. Painted in 1916, one cannot help but wonder to what The Time of Roses alludes. While Europe and the rest of the world are in the grips of a war more devastating and on a greater scale than any other in recorded history, here sits Godward's dream-like beauty, contemplating her flower with sobriety. Her passive grip on the blades, the white rose that seems to stand in opposition to the arrangement of crimson, yellow and pink flowers, the discarded stem with blemished leaves, and of course the slain feline upon which she rests, all conspire to create a deeply meditative composition. He is presenting his archetypal woman as a transcendent hero and an allegory of peace. At this time, Godward maintained his practice in Italy. While he may have rejected the Futurist Manifesto that was written seven years prior, or not appreciated the beauty of works by his contemporaries, such as Monet in Giverney painting his late Waterlilies, Godward was well aware of what was happening in European art circles and the avantgarde. His reputation for being exclusively concerned with the creation of harmonious images and appealing to classical notions of beauty may be sound when faced with much of his output, but The Time of Roses presents an allegorical image that straddles symbolism and classicism. Not to be dismissed as an escapist vision of serenity and simplicity, here Godward has effectively married his technical mastery to compelling comment.
at 1:00 PM

Beautiful. The longer I look at her the more I expect her to let out a quiet sigh. It's like when I look at the Mona Lisa, I always feel as if she's going to blink now at any moment.