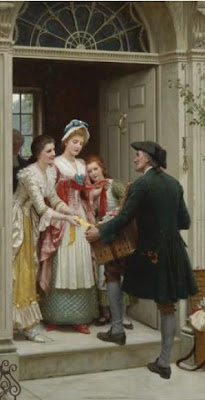 signed E. BLAIR LEIGHTON and dated 1902 (lower left) oil on canvas 42 by 22 in. Though Leighton may be best known for his medieval compositions, he also painted a large number of nineteenth century costume pieces which share similar subject of male female interaction and romantic gesture. When one looks at Leighton's body of work as a whole, it is clear that he captures a certain quality that reaches the core of human emotion. Despite differences in time, the subject of love and romance are the same and universal. Like Lawrence Alma-Tadema, Leighton paid tremendous attention to the detail and historical accuracy of his work. He had an extensive collection of original eighteenth century costumes, instruments, and weaponry that he made good use of in his studio. It must be said that a key element in both his medieval and eighteenth century costume paintings was a careful representation of clothing styles and fabrics. If Leighton could not find an original piece that suited him, his wife would work with a seamstress in an upstairs room recreating a replica from original dress patterns. He must have found these costumes very beautiful and had a true passion for painting them. A particularly good example of this is Ribbons and Laces for Very Pretty Faces which was a very popular work after it left the artist's studio. In this painting alone, Blair Leighton utilizes nineteen different types of fabrics: from lace to silk, embroidery to velvet, some quilted and all painted with fine detail, skill, and dedication. In the present work, three woman stand at a doorway dressed in the most magnificent of gowns examining a selection of beautiful textiles and ribbons. The brunette appears to be as taken with the seller as with the wares he offers, while the youngest leans on her sister's arm, gazing off, having lost interest in the finery she is too young to appreciate. Ribbons and Laces for Very Pretty Faces is a veneration of beauty, not only of woman and fabrics, but of young adulthood as well. The copyrights for this work were purchased by the Berlin Photographic Company shortly after it was painted and the image was reproduced by them before 1905 in fine quality prints for public consumption. AUTHENTICATION We would like to thank Kara Ross for providing this catalogue entry and kindly confirming the authenticity of this lot which will be included in her forthcoming catalogue raisonné.
at 6:00 AM

Come on Blogger time you fixed the line break bug