signed with the artist's anthemion l.l.

Moore’s An Embroidery represents a classic statement of his most refined and distinctive style of painting. A beautiful young woman stands full-length against a background of cupboard doors. The frames and the panels of these doors, which are decorated with moulded patterns, as well as a horizontal bar with an indented groove and a vertical upon which the elaborate brass hinges are planted, provide a rectilinear grid pattern, square to the overall composition, which extends over the entire surface of the background except for a piece of patterned floor and folds of a drapery at the lower right. The model is shown with her left arm extended and hand resting on the stile of the upper door, which she is perhaps closing. Her right arm is held across her breast, and supports a heavy weight of material, which she wears as an improvised jacket or cloak. The same fabric is used to make a skirt which brushes the ground and conceals her feet. At her neck, she wears a string of black beads, and in her hair is bound a fillet of cloth or ribbon. The woman appears momentarily interrupted in some private or domestic matter; thus she looks directly towards the spectator, with her body half turned within the shallow space that she occupies.

The painting explores the personality of the female figure in terms of mood. Moore’s genius was to make his message elusive and ambiguous, and the composition decorous and remote from prosaic experience. No clue as to her inner feelings, either of delight or displeasure, at finding herself so observed, is revealed in her physiognomy or physical stance. It is the impassivity and the absence of any indication of willingness to accommodate to the spectator that makes the figure so intriguing and the subject so compelling.

An Embroidery is a wonderfully delicate essay in colour. Every part of the composition – the panelled background, the model’s hair and skin, the striped mat upon which she stands, and the patterns of the fabric which she wears – are blended together within a range of colours including gold and yellow, greys, beiges and sage greens. Against this sombre but most harmonious arrangement, the few slight touches of stronger colour – the pinks and reds of the embroidered flowers, or the darkness of the beads – are striking. All of these elements are carefully planned and considered as part of a decorative whole, which supports in abstract terms the painting’s subtle but deliberate psychological edge.

Early paintings by Moore in which he sought to raise pictorial form to what Walter Pater described as ‘the condition of music’ include Azaleas (Hugh Lane Municipal Gallery of Modern Art, Dublin), the first of a series of standing figures where the colours of the draperies and backgrounds determine the harmonious mood of the piece. In response to this work when first it appeared at the Royal Academy in 1868, Algernon Charles Swinburne wrote of Moore that his ‘painting is to artists what the verses of Théophile Gautier is to poets; the faultless and secure expression of an exclusive worship of things formally beautiful … the melody of colour, the symphony of form is complete: one more beautiful thing is achieved, one more delight is born into the world; and its meaning is beauty; and its reason for being is to be.’

Here, as usually with Moore's work, the title of the painting is incidental, inspired by an otherwise insignificant accessory. 'An Embroidery' presumably refers to the material of the dress that the model is wearing. Moore’s familiar signature emblem – the anthemion – appears on the jamb of the bottom door in the background, just above the lower hinge. The model for the painting, although not identified by name, is seen in a number of his works of the same period, for example A Decorator (fig.1) and A Yellow Room (fig.2). 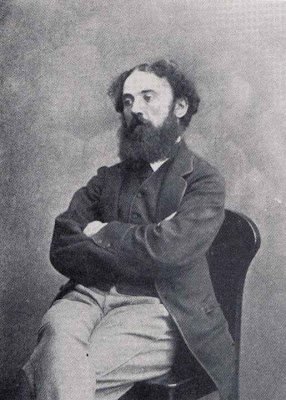