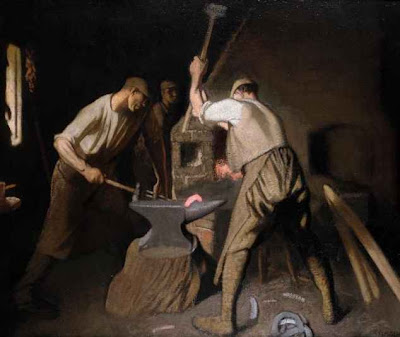 signed l.r.: G. CLAUSEN.; inscribed with the title and signed and dated on the reverse: A VILLAGE BLACKSMITH/ G CLAUSEN 1931

Our Blacksmith was Clausen's major exhibit at the Royal Academy exhibition of 1931. He had painted a smaller picture entitled The Blacksmith in 1926 (Royal Borough of Kensington and Chelsea Libraries) which focused on the left-hand figure of the man working an ingot of iron into a horseshoe. He is holding the iron with long tongs and has a hammer for working the metal around the pointed end of the anvil. The scene was painted in a forge in Essex where smithies were still active in the early twentieth century. Clausen observed the men working and made a series of energetic sketches to capture force and dynamism of strenuous work. His finished compositional sketch, squared up for transfer of the design to canvas, is in the Victoria and Albert Museum (Department of Prints and Drawings).

The powerful expression of masculine strength found in The Blacksmith was magnified in Our Blacksmith which is arguably Clausen's most dramatic picture of human industry, the labours of physical exertion and the fire and brimstone of the industrialised world. The way in which the red-hot iron casts light upon the clothes of the figures and creates deep shadows, had previously been explored in In The Gun Factory at Woolwich Arsenal of 1918 (Imperial War Museum, London). The present work continues in the genre of paintings depicting industrial labourers that Stanhope Forbes began with pictures such as Forging the Anchor of 1892 (Ipswich Museum and Art Gallery), The Smithy of 1895 and The Steel Workers of 1915.

On the 27th October 1927 Clausen was introduced to the leading industrial engineer W F Crittall (1887-1956), by Crittall's father who owned a still life painting by the artist. Crittall was a member of the Design and Industries Association and had trained at the St John's Wood Art School where Clausen had distributed prizes. He later designed a revolutionary way of making metal framed window frames. The two men became close friends and Crittall commissioned the present work, possibly after seeing The Blacksmith which was still in Clausen's studio. Clausen was also asked by Crittall to find other artists to paint local workers for a series of pictures he wanted to purchase for his home at Great Easton. Clausen and Crittall holidayed together on several occasions in Walberswick and Clausen painted his portrait for the Royal Academy exhibition of 1936.

Clausen painted the present picture in the forge of Great Easton close to Clausen's home, Hillside cottage and Crittall's house, New Farm. The blacksmith was modelled upon Great Easton's own blacksmith Mr Turner, whilst his assistant Mr Rolph posed for the figure on the right and Mr Hayden for the third figure. Rolph was paid the princely sum of 2s 6d for standing with his heavy hammer held aloft about to strike the glowing iron. He was dressed in leather puttees, the protective clothing of his profession.
at 6:00 AM