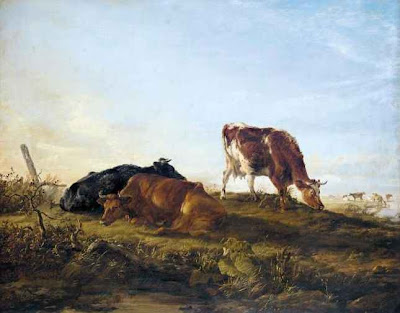 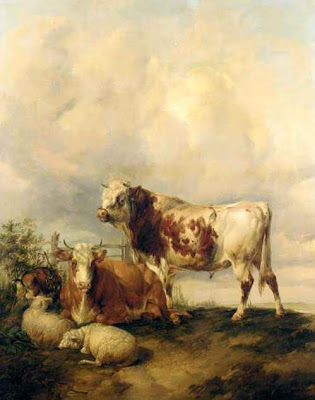 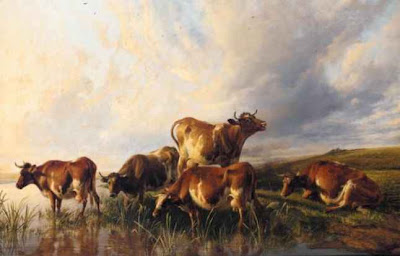 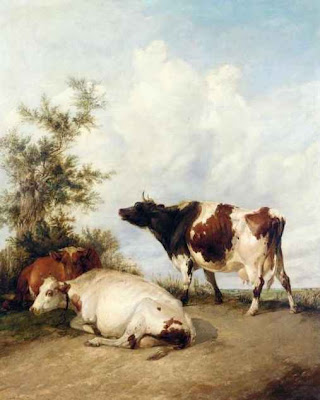 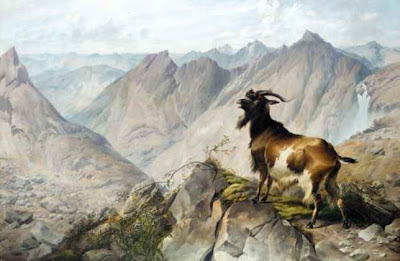 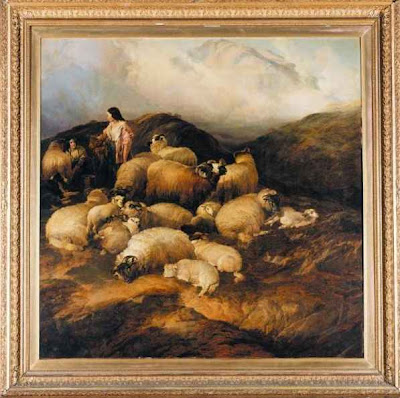 In the foreground, two cows lying down and another standing to the right, on the bank of a river. With part of a fence to the left and a group of cattle seen in the distant meadow to the right.

Waagen referred to the painting simply as Three Cows, ‘true, powerful, and clear’ (Vol.4, p.418). '.... a perfect gem of its kind - the subject is simply three cows grazing or ruminating in a slip of pasture on the banks of a river, fringed with sedges, dock leaves, and other wild plants, most exquisitely rendered, and, as well as the cattle, brilliant with the glow of sunset. A more delicious example of pure pastoral art was never produced by any painter, ancient or modern,’ (James Dafforne, p.135).

The sons and grandsons of successful farmers and cotton merchants, Samuel Ashton and his three brothers also entered the textile business. Noted for their fair-minded attitude towards their employees, the Ashtons of Hyde did much to improve both the working and living conditions of their mill workers.

When Samuel Ashton decided to form a picture collection in 1848, he relied almost exclusively on the advice of Thomas Agnew. Sunset, bought from Agnew's on 9 August 1848 for £315.00, is included in a list of Samuel Ashton's purchases between 1848 and 1856, (illustrated in Geoffrey Agnew’s history of the firm, opp.p.17). Ashton’s collection, which included a watercolour and one other oil by Cooper, passed on his death to his younger brother Thomas.

A pencil sketch of the composition, retained by Cooper as a reference to the picture. It is inscribed on reverse 'Sunset, Royal Academy Exhibition 1848, 3ft.4in.x2ft.8in. For Mr Criswick, £157.10.0' (Westwood collection). Whether the painting was intended for Mr.Criswick but actually sold to Agnew, or whether there were two versions of this painting, is not known.

We are grateful to Kenneth Westwood for preparing this catalogue note.

T. S. Cooper, My Life, 2 vols., 1890, Vol.2, p. 192
CATALOGUE NOTE
'It was a large picture, and met with good success. I chose that point in the narrative of the Jewish ceremony in which an offering is made by the priest for the sins of the whole community, where the scapegoat is supposed to have reached that uninhabited land. He has made his way up the rugged mountain-sides, and stands upon a spot whence he espies an endless view of bare rocky land. "A scanty patch of herbage", says one of the newspaper descriptions, "is on the ledge of rock on which he stands; a few thorns and thistles are beside it, and everywhere desolation surrounds him, whilst high in the air a pair of vultures hover. The figure of the scapegoat is very fine. Indeed, the picture is boldly conceived and powerfully executed." (T. S. Cooper, My Life, 2 vols., 1890, Vol. 2, p. 192)

A smaller related picture entitled A Goat in the Mountains, (oil on panel, 18 by 24 in., signed and dated 1881) is known.We are grateful to Kenneth Westwood for preparing this catalogue note.

These cow paintings are great! I always wanted to paint a cow, but never get around to it.

Cows and Sheep were definately his thing though that Goat isn't bad.