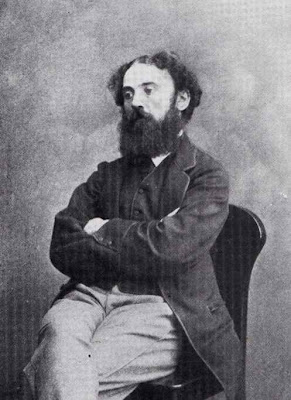 Moore was born in York and trained at the Royal Academy Schools and abroad. His early work was influenced by the Pre-Raphaelites but by the mid-1860s, after studying the Elgin marbles, he developed a style of aesthetic classicism. Like his friend Whistler, whom he met in 1865, his paintings are frequently 'subjectless', following the principle of 'Art for Art's sake.'

I didn't know Albert Moore until looking at artists who were not members of the pre-Raphaelit brotherhood themselves, but were clearly influenced by PRB aesthetics. I liked his designs for fabrics, tiles, stained glass and wallpapers, although the viewer would be hard pushed to tell who the artist was.

He did some interesting work though. I think this is my favourite:

though very Victorian and styalised.