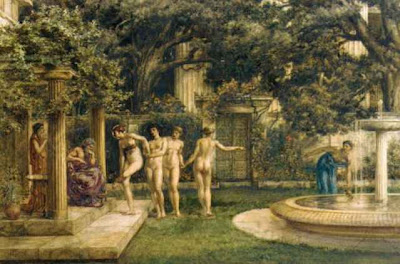 signed with monogram and dated 1875 l.l.: further signed and inscribed on an old label attached to the stretcher: E. J. Poynter R.A./ Venus & Aesculapius./ In times long past when in Diana's chase/ A bramble bush prickt Venus in the foote/ Olde Aesculapius helpt her heavie case/ Before the hurte had taken any roote/ Wherehence although his beard was crisping hard/ She yeilded him delight for his reward.

watercolour with bodycolour on paper laid on canvas
12 by 17 3/4 in
http://www.sothebys.com/app/live/lot/LotDetail.jsp?sale_number=L05133&live_lot_id=20

‘The year 1880 was marked by the completion of what is considered by many (including the artist himself) as his finest work. This was the picture called ‘A Visit to Aesculapius’… It must be regarded as one of the most satisfactory acquisitions of the Chantrey Gallery, as the artist is well worthy of representation in the collection, and this is a capital example of the master… the colour of the whole picture, if not rich or glowing like a Titian, is soft and harmonious, and that its reticense is in keeping with the classic severity of the subject. The four female undraped figures are perhaps the most beautiful of the artist’s creations, and they are charmingly grouped, reminding one of some antique gem, or that famous group of Graces at Vienna which Raphael copied. It is plain, however, that these graceful forms have been studied from the living model, and the execution, though carried to a high point of finish, is pure in touch, and masterly throughout. In composition, for delightful arrangement of form and rhythm of line, it is undoubtedly the finest of all Sir Edward’s works, and its story is perfectly told without need of verbal explanation.’ (Cosmo Monkhouse, ‘Sir Edward J. Poynter, P.R.A.; His Life and Work’, special number of Art Annual, 1896, pp. 18-20)

The present watercolour predates by five years the famous oil version of the same subject and composition which was exhibited at the Royal Academy in 1880 and subsequently bought under the terms of the Chantrey Bequest for the National Gallery of British Art (now Tate Britain). The subject is taken from verse XX of the poem Hekatompathia of Thomas Watson, which describes how Venus visits the sacred grove of Aesculapius the God of Healing after she injures her foot while hunting. Poynter depicts the lissome Goddess of love attended by her hand-maidens and surrounded by the white doves which always herald her approach. She lifts her foot in an elegant movement to be examined by the thoughtful Aesculapius whilst water is gathered at a babbling well to soothe her ache.

'It is not too much to claim that, as Sir Edward Poynter's more ambitious work is of this classic order, something of the same quality has overflowed into these small but choice water-colours which are his recreation...' ('Sir E. J. Poynter as a Water-Colourist', Art Journal, 1903, p.190)

The watercolour was owned by the amateur etcher and wealthy accountant John Postle Heseltine whose well-known collection which included works by Turner and Whistler. Also by Poynter was a portrait of John Postle Heseltine's wife Sarah, a work which had been exhibited at the Dudley Gallery in 1873. It is likely that Poynter met Heseltine at the Arts Club where he was a member between 1868 and 1892. Heseltine lived at 196 Queens Gate from 1877 which was decorated in the Aesthetic style and Richard Norman Shaw designed his country residence at Walhampton House in Hampshire. The picture was included in the three day sale of his pictures in 1935.
at 6:00 AM