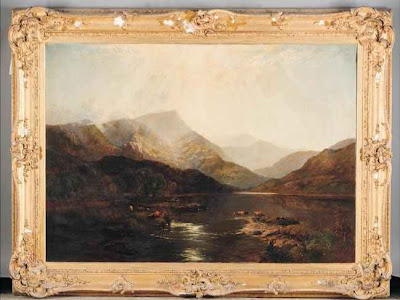 signed l.r.: H. J. Boddington; indistinctly inscribed on an old label attached to the reverse; No 1 A ----

Henry John Williams was a member of the talented Williams dynasty of landscape painters and changed his name to Boddington (his wife's maiden name) to prevent being confused with his father and brothers. He established himself as a painter of landscapes in Devon, Derbyshire and Wales and the present picture is an impressive example of his work which shows the close similarity of Boddington's work with that of his brother Sidney Richard Percy.

As Jan Reynolds has noted, 'After Boddington first visited Wales in 1846, no other influence that followed was of the same importance. He returned many times to the wild mountainous country around Dolgelly and Bettwys-y-Coed... One of his most characteristic effects is the appearance of a warm day, with the sun just out of the picture, giving a filmy, hazy atmosphere to the painting, with deep blue shadows adding greater value to the opposing tones of yellow.' (Jan Reynolds, The Williams Family of Painters, 1975, pg.21.)
at 6:00 AM