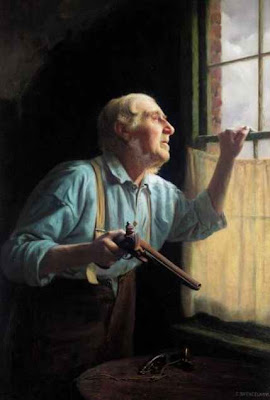 World War II was to have a great effect upon Spencelayh’s life and art, but rather than depicting the air-raids as terrifying events of explosion and destruction, he saw the human side of the War and the effect it had on the patriots who remained in their homes waiting until it was all over. Zeppelins depicts a stoic old man glaring out of his window, searching the skies for enemy airships, his antique pistol ready in his hand for whoever dares to invade his home.

Spencelayh and his wife were only too aware of the danger threatening the safety of their beloved Britain. Their house in Lee in Kent, was destroyed by a bomb in 1940 and they only just escaped unscathed, shaken and dishevelled. A fascinating record of the event is given by Aubrey Noakes, ‘One of the most curious things about the bombing at Lee was the way in which, just after the Spencelayhs got clear of the house, the front wall crumbled into the street, and, just like a doll’s house when opened up, passers-by could look right into the rooms and see dozens of his paintings there still hanging on the walls – except in one room, where the blast had turned all the pictures with their faces to the wall. Spencelayh’s comment on this was, ‘It wasn’t a compliment, was it?’ (Aubrey Noakes, Charles Spencelayh and His Paintings, 1978, p. 77)

Many of Spencelayh’s works had been destroyed with his house in Lee and on the staircase of his new home in Bozeat in Northamptonshire where the Spencelayh’s rehoused themselves, hung the picture which had been on his easel at Lee, scorched and half destroyed by the flames. Four-hundred drawings were lost and innumerable paintings, but Spencelayh refused to give up and by 1941, was exhibiting again. Zeppelins is one of the pictures that he painted in Bozeat, in direct reaction to the War which had stirred him to paint with his usual intensity of skill, but with more of a feeling of drama and tension.

The pictures he painted in the period after his move to Northamptonshire, alternated between timeless compositions of old gardeners, clock repairers and the like, and reflections of the events which he had experienced and knew from the newspapers ‘much-publicised patriotic essays of his, with bang-on, snappy, topical titles he set much store by’ (Ibid Noakes, p.77)

The Spencelayhs time at Bozeat in Northamptonshire was a special period for the artist and he was very well-loved by his neighbours, as the Northampton Independent stated on the 22nd May 1942; ‘The war had its compensations. It has brought a great artist to Northamptonshire. Can Northamptonshire make his life in the shire so pleasant as to keep him here?’ (Aubrey Noakes, Charles Spencelayh and His Paintings, 1978, p. 77)

Spencelayh found his models among the retired farmers and bootmakers of Bozeat and never used professionals, as he explained to a newspaper reporter ‘My old men are all amateur sitters. Usually they work-and-smoke! - from 9: 30 to 5 or 6 p.m., and if I paid them some of them would gladly stay all night! I feed them well, give them plenty of “rests”, and let them do exactly as they like. I always “give in” to a sitter, because I know the picture depends entirely on him.’ (Ibid Noakes, p. 78). Zeppelins is not a painting of a man in his last years waiting to die, or even a work depicting the threats and terrors of war, it is a painting of patriotism and courage and the artist’s affection for a generation of men whose values and qualities made Britain a country he dearly loved.
at 6:00 AM