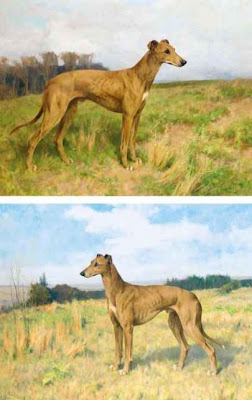 In the first two decades of the twentieth century Arthur Wardle was one of the best known of living British animal painters. He portrayed an astonishing diversity of subjects with an engaging naturalism and a command of different media. He exhibited for over six decades at the Royal Academy and established a great following for his portraits of animals

Dee Rock (born May 1931 son of Red Robin and Disentra) was the winner of the Waterloo Cup in 1935. He was the sire of four Waterloo Cup winners, including Swinging Light who won twice and Dee Flint (born April 1937 son of Famous Flight) who won the cup in 1940. Both greyhounds were owned by Col. J E Dennis and trained by Harold Knight at Wellfield kennels in Preston Brook.

A painting by Wardle of Distingue, Dendraspis and Dilwyn, three greyhounds also owned by Colonel Dennis is known (Bonhams & Butterfields, 30 March 2004, lot 60). An oil sketch of Desdrasper, another Waterloo Cup winner was included in his studio sale held in these rooms (23 November 1994, lot 74).
at 6:00 AM