Shades of Grey: A Closer Look at the Work of L.W. Hawkins 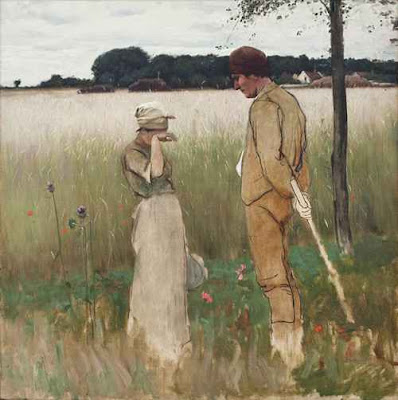 Though I concentrate on British artists, ArtMgick http://www.artmagick.com/ mentions this lovely exhibition about the French artist LW Hawkins which I greatly admire. ArtMagick is a wonderful site dealing with a wider range of pictures / poetry etc. than I do, and is always worth reading.
http://www.mta.ca/owens/exhibitions/index.php

Shades of Grey brings together ten paintings by French painter Louis Welden Hawkins (1849-1910), all from the original Owens collection that was acquired in Europe in the late Nineteenth century. These paintings are contextualized within the school of Naturalism and the artists’ colonies that existed in France in the late 1800s. While the French Impressionists commonly dominate the history of later Nineteenth century art, the story often goes untold of the artists who resisted the celebration of the city that commonly infused Impressionism, and migrated to the countryside, where artistic colonies began to develop. Hawkins was one of these artists, and his paintings depicting peasants and rural life were executed in the picturesque artistic communities of Barbizon and Grez-sur-Loing.

The Owens’ collection of paintings by Hawkins is in fact the largest public collection of his work; Hawkins’ paintings are seldom exhibited and very little scholarship has existed on his life and work. Shades of Grey, presents an unprecedented look at Hawkins’ life, his work, and the framework within which these unfolded.