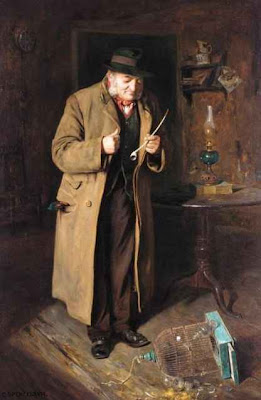 Charles Spencelayh’s endearing images of mature men, in cluttered interiors and involved in domestic every-day activities remain eternally popular for their sensitive and humorous depiction of genteel maturity. His rendering of bric-a-brac details and typically English interiors, which everyone relates to from visits to grandparents, make his pictures immediately accessible. As Aubrey Noakes has explained; ‘Much of Spencelayh’s work now appears to me to possess a nostalgic quality about it. The agreeable clutter of inherited possessions, common enough in most households early this century, and even between the wars, is becoming more and more of a memory as people find themselves crammed into flats and pressured into the purchase of modern purpose-built furniture.’ (Aubrey Noakes, Charles Spencelayh and his Paintings, 1978, pg. 32)

Charles Spencelayh was born in Rochester on the 27 October 1865, a few months after the death of his father Henry, a partner in the engineering company of William and Henry Spencelayh. Charles’ father reputedly knew Charles Dickens and the young boy was brought up to revere the great author, whose interest in character and domestic detail was to be a great influence upon his work. Charles’ family had initially wanted their son to become a professional singer but his artistic talents overtook his musical enthusiasm. At six months old he had been given a pencil and paper and aged eight he was given his first paint set to make copies of the old masters which took his fancy. He was schooled at Dr. Burns’ school in Rochester and when good enough, was enrolled in the National Art Training School at South Kensington in 1885.

In the first years of the 1890s, Spencelayh lived in Chatham in Kent and in 1890 he married for the first time, Elizabeth Hodson Stowe, a marriage that lasted forty seven years (in 1939 he married again after Elizabeth’s death). Spencelayh was ‘a simple, uncomplicated man, happy in his work, and supremely fortunate in that after his happy childhood he married in succession, two kind, loving women who devoted their lives to seeing him happy and ensuring that nothing worried or distracted him from the main business of his life: painting, drawing, painting, drawing.’ (ibid Noakes, pg. 46)

In 1892 Spencelayh exhibited his first pictures at the Royal Academy, portrait miniatures of women which were followed in the next few years by similar pictures. He exhibited miniatures from various addresses in Chatham and New Brompton until 1912 when the Spencelayhs moved to Lee in Kent, near Blackheath and Greenwich. He had by this time begun to paint the old men in parlours and workshops for which he became famous. In the early 1920s a patron invited Spencelayh to settle in Manchester where he spent some of his most important formative years as an artist, before moving back to Lee in 1936. Unfortunately Spencelayh’s house was bombed in 1940, the blast demolishing the façade of the house, leaving all of the rooms exposed to the street like a doll's house. Miraculously the interiors of the rooms were untouched, except one where all the pictures had flipped around to face the wall. After the bombing of the house in Lee, the Spencelayhs moved to a safer home in Bozeat in Northamptonshire where he took on a new lease of life; ‘He blossomed as a genial, chattering local worthy whose company was eagerly sought.’ (ibid Noakes, pg. 75). It was in Bozeat that Spencelayh painted many of his most accomplished studies of maturity from local ‘old-timers’, and his reputation was assured. Charles Spencelayh died in a Northampton nursing home on the 25 June 1958, aged ninety-two.

Spencelayh had many admirers, including Queen Mary, who commissioned him to paint a postage-stamp sized portrait of George V for the famous doll's house at Windsor, which was first shown at the Wembley Exhibition of 1924. Queen Mary bought several other paintings by Spencelayh in the early 1950s to hang on the walls of Marlborough House. Sir Alfred Munnings was also much impressed by Spencelayh’s work and said of one of his pictures; ‘Give me £1,000,000 – I couldn’t begin to do one part of it.’ (ibid Noakes, pg. 26)
at 6:00 AM