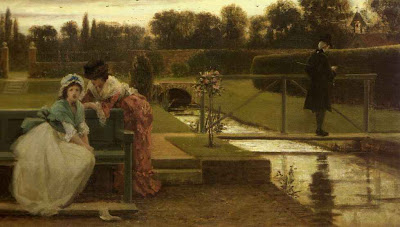 signed and dated l.r.: G D Leslie/ 1866 inscribed with artist address on the strecher; bears an extract from a letter written by Leslie to the artist George Price Boyce in January 1881, 'The background was from an old garden on the brook at Eweline in Oxfordshire but I took liberties with the extreme distance. The brook and bridge are as in nature. I left out some kitchen garden stuff on one side.'
oil on canvas
27 by 47 cm., 10 3/4 by 18 1/2 in

This is the first sketch painted in 1866 and a larger version was exhibited at the Royal Academy in 1867, no.131

In his dairy of Feburary 27 1870, the landscape artist, George Price Boyd refers to a visit, which he paid to G.D.Leslie in his new studio in Grove End Road. Boyce records that Leslie 'showed me a sketch for his 'ten minutes to decide'picture, which he proposes to swap for something of mine. Very jolly of him.'

On a bench in the foreground of the garden, sits a young lady who has received a less than welcome marriage proposal, she is discussing the matter with a companion. To the right stands an exacting suitor with his timepiece waiting for a decision, hence the title 'Ten Minutes to decide'.

The finished picture was one of three exhibits at the R.A. of 1867, the year in which Leslie earned his Associateship. In this version the man is turned towards the girls, his prim feature clearly visible, and his gaze fixed intently on them as they anxiously ponder his ultimatum
at 7:03 AM