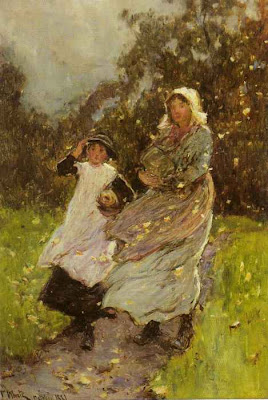 Biography:John White RI, ROI, 1851 (Edinburgh) - 1933 (Axminster)
Born on the 18th September 1851 in Edinburgh, a painter of landscapes, seascapes, portraits and rustic genre subjects in oil and watercolour. His family emigrated to Australia in 1856 and he was educated in Melbourne. He returned to study at the Royal Scottish Academy schools from 1871 and won the Keith prize for design in 1875. He moved South in 1877 and was elected to the RI in 1882 and the ROI in 1877. He retired in 1931 and lived in Beer, Devon.
He died on the 21st December 1933.