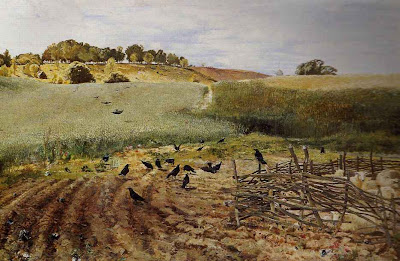 [The Rooks' Parliament]
oil on canvas
exhibited at the Universal Exhibition, Paris in 1867
.
1829 - 1877.
Landscape painter, son of (Rev.) Thomas Raven (a watercolourist). Exhibited at the RA and elsewhere, iften views of Sussex, Wales and Scotland. Visited Switzerland and Italy. Self taught. Influenced by Crome, Constable and the Pre-Raphaelites. Lived in london from 1871 till his early death (drowning whilst bathing in Harlech). His younger sister married Henry Holiday another artist influenced by the Pre-Raphaelites. His brother-in-law records that Holman Hunt held this artist in high esteem.
.
It has been speculated that this was painted in or near Cobham in Kent. A label on the back calls it The Crops Green, the work shown at the Paris Exhibition. The artist seems to have changed the title later.
at 7:36 AM