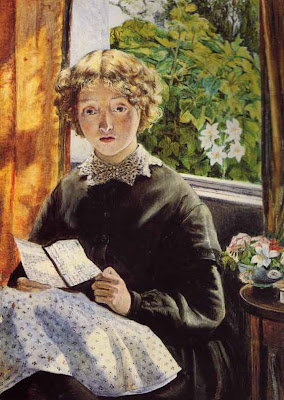 [A Letter from Home]
oil on board
inscribed 'No. 1/"A letter from Home"/30 Guineas/Peter Paul/London' on an old label on the reverse.
14 x 10"
1830 - 1900.
Marshall was a partner in the firm of 'Fine Art Workmen', Morris, Marshall, Faulkener & Co.
Known as a hearty, extrovert, likeable character, he was born in Edinburgh but spent his early life in Liverpool. His profession was as a surveyor and sanitary engineer but he learnt to paint in his spare time and exhibited at the Liverpool Academy. He was influenced (clearly here) by the Pre-Raphaelites and married the daughter of John Miller, a Liverpool Merchant, settling in London in 1861 and becoming a partner in the Morris firm. His close friend was Ford Madox Brown.
It is thought the sitter was a Governess and the black edges to the letter suggest a death. Notice also the Lily behind her.
http://www.morrissociety.org/JWMS/AU96.12.1.Gibeling.pdf
http://www.artnet.com/artist/578845/peter-paul-marshall.html
at 7:26 AM