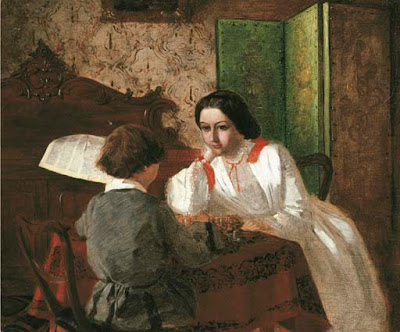 
Born at Kotagiri, a hill station in Madras, India, Arthur Boyd Houghton was a painter, illustrator and caricaturist. He was deeply affected by the idealism and intensity of vision of the Pre-Raphaelites and is best known for his illustrations to Dalziel's Arabian Nights and for small genre paintings such as the present work. Houghton was one of the most gifted draughtsmen of his time and one of the finest illustrators.

The intimate scale and jewel-like quality of the present work is typical of Houghton. When he was a child, a friend had fired a toy cannon at his head that left him blind in one eye. He was therefore unable to sustain a continuous output of large important works for exhibition at the Royal Academy. His small informal works, prompted by vivid memories of his own happy childhood, do not always have fixed titles and are therefore difficult to date. One of the better known is Interior with Children at Play (Oxford, Ashmolean Museum) and several small works of the early 1860s which chart the pleasures of a day at the seaside, at Ramsgate Sands, Broadstairs or Brighton.
at 6:00 AM

Arthur Boyd Houghton was a distant ancestor. I hope to buy some of his work in the future!

Hope his talent got passed down the generations - a very good artist.

SCH "Sammy" Davis. AKA Sidney Charles Houghton. ABH was his Great Uncle. If you google Autocar SCH "Sammy" Davis. You will read about this remarkable man's motor racing career. In addition My Great Uncle Sammy was illustrator and editor of Autocar from 1900-50.
He fought in both World Wars.
Sammy did go to the Slade School of Art, and was a good artist and cartoonist. But not in ABH's league!

All the best!
Mike Risbridger