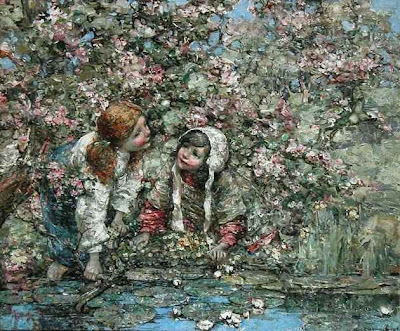 Edward Atkinson Hornel was a landscape, genre and decorative painter who worked in oils. Hornel was born in Bacchus Marsh, Victoria, Australia on 11th July, 1864 to Scottish parents. The Hornel family then moved to Kirkcudbright, Scotland where Edward spent his childhood. Between 1881 and 1883 he studied art at the Trustees Academy in Edinburgh and continued his training under Verlat in Antwerp. The works of the early period show a strong Belgian influence; mostly landscapes with figures in the manner of Maris or Mauve. However, through his long friendship with George Henry, Hornel moved to a more colourful, decorative style. Indeed their ten-year long association produced a series of pictures that are regarded as the essence of the Glasgow School. Using low-keyed palettes, Henry and Hornel tried to escape subject and local colour, concentrating on purely decorative colour arrangements. Edward Atkinson Hornel was deeply influenced by Japanese art, this was inspired by a trip to Japan, 1893 to 1894. Hornel also visited Ceylon and Australia in 1907 and Burma, Canada and America between 1920-1921. Hornel exhibited for the first time in 1883 at the Edinburgh Exhibition. He became a member of the International Society of Painters and Engravers and an associate member of the New Gallery. In 1901 Hornel was elected to the Royal Scottish Academy but declined the honour.

Hornel lived for many years in Kirkcudbright where he died on 30th June 1933.

I really like this. You did a great job with the eggplant. Love the quiet colors.