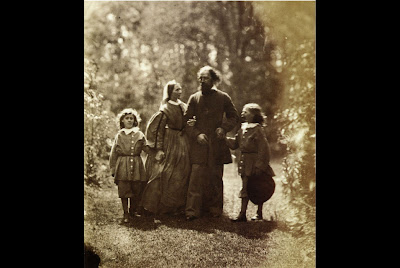 PITTSBURGH, PA.- On October 23, 2010, the exhibition For my best beloved Sister Mia: An Album of Photographs by Julia Margaret Cameron opened at the Frick Art & Historical Center. Now considered to be one of photography’s early masters, Julia Margaret Cameron (1815–1879) is one of the best-known photographers of the Victorian era. From the time she received her first camera as a gift when she was 48 years old, she worked to develop the medium and her personal artistic vision. The Mia album features 70 photographs that Cameron compiled collaboratively with her sister Maria “Mia” Jackson. Typical of a family album, the Mia album contains images of family, friends, and neighbors. However, the portraits are posed and photographed in Cameron’s distinctive style, which melds the real with the ideal and the ordinary with the allegorical. The Mia album provides insight into Cameron’s development as an artist as well as the role of photographs and albums in creating a personal mythology.

The majority of the photographs in the album are by Cameron, including portraits of luminaries like her Isle of Wight neighbor Alfred, Lord Tennyson and the Pre-Raphaelite painter William Holman Hunt, however, the album also includes a number of photographs attributed to others, most significantly among them pioneering photographer Oscar Gustave Rejlander (1813–1875). For my best beloved Sister Mia: An Album of Photographs by Julia Margaret Cameron will remain on view at The Frick Art Museum through January 2, 2011. Admission is free.

Julia Margaret Cameron’s work will be especially at home at the Frick, which has developed a history of exhibiting photography over the past decade—from contemporary camera artist Vik Muniz to the 100-year survey of the medium featured in the 2009 exhibition Icons of American Photography: A Century of Photographs from the Cleveland Museum of Art. For my best beloved Sister Mia: An Album of Photographs by Julia Margaret Cameron will also provide an opportunity to look at the various family photographs on site at Clayton, the Frick family home, and reflect on the role of photographic prints and their domestic uses in the late 19th century.

Frick Art & Historical Center Director Bill Bodine comments, “The Frick is pleased to present this important body of work by Julia Margaret Cameron, one of photography’s earliest celebrated masters. Through our presentation of this exhibition and its related programs, we hope to enlighten our visitors about the development of photography in its earliest stages—as well as the role the art form played in late-19th-century life. We will also encourage our audience to make connections between works in the exhibition and photographs in our collection, on view at The Frick Art Museum and Clayton, the Frick family home.”

JULIA MARGARET CAMERON
Rather than being a proper Victorian housewife who suddenly turned artistic, an unconventional streak ran deeply within Julia Margaret Cameron. Born in Calcutta, India, to a well-to-do British family, Julia Margaret Cameron was one of seven sisters renowned in Anglo-Indian society for their intelligence and beauty.

In 1838 she married Charles Hay Cameron, who was 20 years her elder. The family lived for a time in Ceylon (now Sri Lanka), where they purchased a number of coffee and rubber plantations before returning to England in 1848 and eventually establishing themselves on the Isle of Wight, a quiet seaside enclave. It is unknown exactly when Cameron first became interested in photography, but she was given her own camera in 1863 at the age of 48, as a Christmas gift from one of her grown daughters. At the time, her husband was traveling abroad and her six older children were not living at home.

Cameron worked in a time of great experimentation with the young medium of photography. She converted an outbuilding on the family’s property into her studio and threw herself into her work. In a time of messy chemicals, long exposures and large, wet glass plate negatives, Cameron soon developed a unique approach. Using soft focus, and sometimes drawing on or manipulating the plates, Cameron created photographs known not only for a painterly look (often, brushstrokes are visible from the method of coating the plate) but also for a painterly interest in composition and allegory—often derived from Italian Renaissance models.

Cameron’s 11-year photographic career ended at its peak in 1875, when the family fell on hard times. Her husband, Charles, decided the family should move to their plantations in Ceylon, where two of their sons already were in residence. Few of her images have survived from this period. She died in 1879 at the age of 63; her husband outlived her by one year. They are buried together in Ceylon.

THE EXHIBITION
For my best beloved Sister Mia: An Album of Photographs by Julia Margaret Cameron is composed of 70 albumen silver prints, made from collodion wet plate glass negatives. It includes family portraits and allegorical works, such as Julia Margaret Cameron’s famous series on Mia’s daughter, Julia Jackson (1846–1895), who later became the mother of the writer Virginia Woolf. In addition, the album features images of some of the most celebrated figures of Victorian England, including Alfred, Lord Tennyson and the Pre-Raphaelite painter George Frederic Watts. Cameron also collected work by her colleagues, including O. G. Rejlander, one of the first to promote photography as an art form and Lewis Carroll (Charles Dodgson), the author of Alice in Wonderland.

A startlingly fresh image of the poet Alfred, Lord Tennyson and his family by Oscar Gustave Rejlander (1813–1875) from 1862 is included in the exhibition. It was included in the section of the Mia album which Cameron devoted to other photographers and peers she admired. The Mia album was a collaborative venture—Cameron would send photographs to her sister Maria “Mia” Jackson and give her instructions for how to place them in the album. The first 60 or so images in the album are all by Julia Margaret Cameron, but at the conclusion of looking through those pages, the viewer would turn the album over and go from back to front, to see a selection of images by other artists— most significantly among them, Rejlander.

In Rejlander’s family portrait, Tennyson the patriarch is the star, the center of his adoring family, who hold onto him as he moves with confidence through a park-like setting, rendered romantic and evocative because of its soft focus. The quality of light framing the figures and dancing off the greenery feels like a blessing or validation of this most esteemed of Victorian poets. Rejlander is a significant figure in the history of photography. Like Julia Margaret Cameron, Rejlander worked to establish photography as an art form in its own right and experimented with both the technical aspects of the medium and subject matter. The Mia album contains a number of examples of his work and even prints likely made in collaboration with Cameron.

During the years that Cameron was active in photography, she lived on the Isle of Wight, off the coast of England, and developed a close relationship with her neighbor Alfred, Lord Tennyson. This friendship ensured that most of the well-known social, political and artistic personalities of Victorian England who made their way to the Isle of Wight also made their way in front of Cameron’s camera. Several portraits of Tennyson may be viewed in the exhibition, including Cameron’s famous Dirty Monk image (1865), given that name by Tennyson himself.

For my best beloved Sister Mia provides a rich survey of Julia Margaret Cameron’s accomplishments, as well as a fascinating and intimate glimpse of the lives of eminent Victorians. Perhaps most profoundly, it provides a model of the importance of photography in creating a personal history or a family mythology. Through family albums, we preserve what is important and see ourselves the way we want to be seen. In this way, the Mia album is a technically brilliant and physically beautiful embodiment of what can be accomplished when photography is put to personal use.