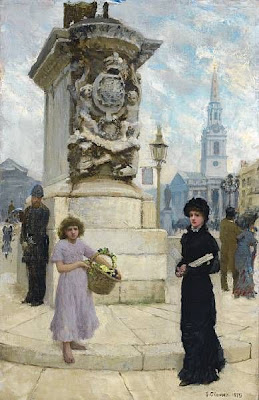 George Clausen's The Flower Seller, Trafalgar Square, describes a typical encounter in one of the most famous urban spaces in the world.

Surrounded by the 'trophies of national pride'1, the great colonial offices, Trafalgar Square was described by an imperialist observer at the turn of the century, as the 'hub of creation'. A quarter of a century earlier it had been the focal point for political demonstrations, beggars, prostitutes and street traders spilling out from Covent Garden to mingle with foreign tourists.2 In 1888, a little more than a year after the Free Speech Riots, Henry James described the square as a 'grimy desert', using Joseph Pennell's atmospheric illustration of a typical wet evening to make his point (Joseph Pennell, Trafalgar Square, 1888, from The Century, vol 37, no 2, December 1888, p. 228, fig. 1).3 It was here that Clausen came in 1879 to produce studies for the first of a sequence of canvases on the theme of flower sellers. Looking into the square from its Whitehall approach, he focussed upon the much-eroded pedestal of the equestrian statue of King Charles I by Hubert Le Sueur, cast in 1633. This had been placed on the original site of the Charing Cross, which for centuries was regarded as the true centre of London.4 Standing to the left of Nelson's Column in Pennell's topography, it remains much as it was in Clausen's day.

In the background on the right, beyond a couple stepping down from the pavement, we see the familiar profile of St Martin-in-the-Fields, while on the left, behind the policeman, is the more anonymous east wing of the National Gallery. The young painter was very familiar with the latter – his father had taken him there as boy, to sketch from paintings in the collection.5

At this point, confusion surrounded Clausen's national identity. When his first Academy exhibit, High Mass at a Fishing Village on the Zuider Zee, (Nottingham Castle Museum), was reviewed in 1876, both The Times and The Graphic, hailed him as a Dutch artist, even though he was born in London and was currently living in Fulham.6 The prompt sale of this picture encouraged him to make regular return visits to Holland and for the next five years he continued to exhibit paintings derived from studies made in the villages of the Zuider Zee and the confusion continued. It may even have been exacerbated by the fact that when he painted The Flower (1880, Bristol City Art Gallery), a picture of a child selling flowers at a convent gate, London subjects had begun to overtake Dutch ones.

By 1878 Clausen began to notice that the centre of gravity within London's artistic community was shifting and that some of his more ambitious contemporaries were settling in St John's Wood, Belsize Park and the lower reaches of Hampstead. Edwin Longsden Long, his employer, and recently appointed Associate of the Royal Academy, was for instance, having a studio designed and built for him in Fitzjohn's Avenue, Hampstead by Norman Shaw.7 It may have been through Long that he heard about a new group of eight studios at The Mall in Belsize Park where a vacancy had occurred in no 4. Here Clausen would be neighbours with James Linton, Robert Walker MacBeth and EJ Gregory, all up-and-coming Academy 'outsiders' and close to the successful French expatriate Tissot whose villa was nearby in Grove End Road. At the same time he sensed the limitations of typecasting and although the dealer, Arthur Tooth, told him that if he abandoned his successful Dutch formula he would be 'forgotten in two years', the move gave him confidence to diversify. Clausen embarked upon a period of experimentation, painting women in interiors such as The Novel, Phyllis (Gallery Oldham) and La Pensée, (Glasgow Museums) as well as the first of a series of street scenes commencing with The Flower Seller, Trafalgar Square.9

The simple narrative contained in this challenging canvas is that of a barefoot urchin wearing a shift, trying to interest passers-by in her wares. The child could be a character from Henry Mayhew's exhaustive study of costers in London Labour and the London Poor (1861-5).10 Flower sellers, as contemporary photographs show, habitually set up shop at the base of public monuments in the city and the young Clausen, if he was not familiar with Mayhew's voluminous accounts, would certainly have seen pictures of street hawkers sentimentally treated by older painters such as AE Mulready (see lots 160-163). These took on a dramatic form in Gustave Doré's London, A Pilgrimage (1872, fig. 2), a work that brought the teeming city of Little Dorrit and Edwin Drood graphically to life. Here the flower sellers, huddled on the pavement, are shown as little more than beggars. A reporter in The Graphic accounted for their proliferation as a direct result of the development of the railways and the fact that fresh flowers could now be brought to the city centre cheaply – creating a new underclass of street sellers, and at the same time, a fashion for buttonholes and posies among city clerks and shop-workers. This is clearly depicted in Frank Holl's Sketches in London, The Flower Girl, a full-page cover illustration for The Graphic in June 1872 (fig. 3) in which a pair of young men are caught between an attractive flower girl and two passing ladies. Flower girls, we are told, came in 'various grades':

'There are well-dressed young ladies who abide in trim shops ... and there are ragged, miserable children who merely use the flowers they carry as an excuse for beggary.'11

It was one of the latter that Clausen chose to depict – a barefoot vagrant who, while she attempts to engage a passer-by, comes under the scrutiny of a policeman.

By contrast, the potential target of her advances is an elegant young woman, recalling Tissot's celebrated model, Mrs Kathleen Newton. Having strayed from the leafy precincts of Regents Park and Hampstead, she cuts a silhouette as dramatic as that of a courtesan in a Japanese print. Clausen may well have been looking at this newly fascinating visual source. However, her modishness mattered less than the silent social commentary implied in the juxtaposition of a 'modern' un-chaperoned woman and a flower girl. Over the next couple of years, reappearing as a young mother with her little girl, in a snowy street in A Winter Afternoon (1880, unlocated), and as a demure passer-by in In the Street (Private Collection) Clausen's model became a familiar figure. Within a short time, these generalized settings would be transposed to Hampstead, given a full cast of other street characters, in works such as A Morning Walk (Private Collection), Schoolgirls, and finally, A Spring Morning, Haverstock Hill, his Academy exhibit of 1881.12

Following his marriage to Agnes Mary Webster in that year, Clausen moved from Hampstead out to Childwick Green, in Hertfordshire. The purpose behind this radical step was to totally alter his working practices and to move from urban to rural to urban subject matter. At this moment, Jules Bastien-Lepage, the leading rural naturalist painter in France, provided the inspiration. There followed an impressive cavalcade of woodmen, ploughmen and field workers, but the flower seller was not completely replaced. Within two years, the painter was to return to the city-based themes for what was to be the culmination of his flower seller series. In this, his urchin Flora (1879) has become an aged crone, borrowed from the fields.13

However the supreme irony had come a year earlier when his mentor, the great promoter of 'rustic naturalism', enthralled by London street life, painted his Marchande de Fleurs à Londres (fig. 4) The exchange, as Clausen's early Flower Seller, Trafalgar Square indicates, was a two-way process.

We are grateful to Professor Kenneth McConkey for his assistance in cataloguing this lot
at 1:00 PM