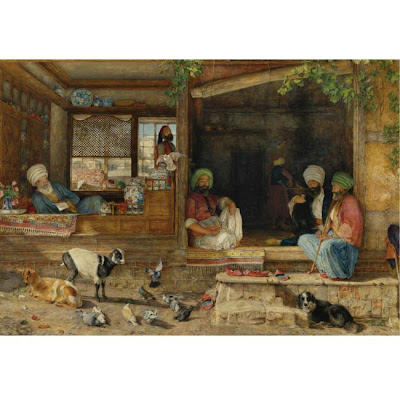 On October 14, 1840 the traveling artist William Collins, R.A., wrote: "We have encountered John Lewis from Greece and Smyrna. He is making a number of drawings. I said I was sure he would turn up on our route." (as quoted in Lewis, p.21). Before his well-documented 1840s residence in Cairo, Lewis traveled from Rome through Albania, Corfu, Janina, the Pindus Mountains, Patrass, Athens, the Gulf of Corinth and Smyrna, ultimately reaching Istanbul (then Constantinople) where the artist would reside for the remainder of the year. He was fascinated by Istanbul's rich cultural heritage and relished the opportunity to see the city's ancient sites, and accompanied Lady Londonderry (wife of the third Marquis of Londonderry whose portrait Lewis later painted) on her tour of the city's mosques. In the words of Major-General Michael Lewis the artist "must have been much moved, or, putting emotion at its lowest, at least much attracted by these great religious buildings of the East" (Lewis, p.21). While a significant number of Lewis' studies done during this period focus on the religious architecture of the city, they are complimented by drawings of the "people of the Levant" from "soldiers, gipsies, circasians, Levantine Ladies, Turkish Girls... even a Dervish" (all spellings original, Lewis, p. 21). Upon Lewis' return to London, such studies and personal experiences informed the incredibly detailed and atmospheric view of The Kibab Shop, Scutari, Asia Minor.

As suggested by its title, the setting of Lewis' Kibab Shop is a street in the northwestern Turkish city of Scutari, "The Golden City," situated on the Asian shore of the Bosphorus, now known as Üsküdar and a district of Istanbul. The area was long an important trade location due to its harbor and its history as base of military operations, an Ottoman post station for Asiatic couriers, and, until the development of the Anatolian railways, the terminus of caravan routes from Syria and Asia. The relative wealth and merchant history of the area is suggested by Lewis' view of a well-appointed and popular shop selling the region's traditional roasted, skewered meat (the use of "kibab" in the painting's title is likely the result of 1850s British phonetics as alternates of "kebab" or "kebop" are linguistically dominate). In the foreground three men in richly colored robes gather in the shade of a dark doorway. In an adjoining dining room, an old gentleman, possibly the shop's proprietor, reads in repose while the standing black-bearded man (believed by many to be a self-portrait of the artist) looks directly at the viewer as he stands at a pass-through between the rooms. The extraordinary realism of the present work rests on Lewis' attention to detail. Each object appears as a miniature still-life, drawn with an exactness and truthfulness to nature. The Chinese export plates, the vase of wilting roses by the balustrade and even the multiple textures and layers of the costumes' fabrics have each been well-studied and carefully portrayed. The clarity of these details testify to Lewis' exuberant use of color and his masterful handling of light and shadow. The foreground is brightly lit by the noonday sun, which falls on the animals in the courtyard, and spills over the lap of the smoking man, leaving his face in cool shadow. The eye is drawn through the shadowy room to a fretwork screen silhouetted in sunlight, framing a group in conversation and an impressive view of the city. In contrast, the smoky red of the cooking fire dimly illuminates the cook at preparing the meal.

Upon the work's exhibition at the Royal Academy in 1858, it was the rare critic who could find any fault with the work. Page after page of Academy reviews applauded Lewis' "perfect study" with John Ruskin deeming it a "very notable picture" (Cook and Wedderburn, p. 159). Linking each review was an appreciation of the work's perceived faitfulness to reality captured not only by the objects and costumes of the Turkish shop but by the temporal constrasts between the drowsy diners and the fluttering pigeons painted stop-motion in flight. As one critic aptly described: "Mr. Lewis very rarely paints a figure in motion; the three or four Turks to whom we are introduced here are all seated, or reclining in a state of dreamy abstraction. The picture being thin and dry bears allusion to water-color practice; but it's finished with that stipple in which its author realizes all his objects. All are somnolent save for the pigeons at the door, and the cook within who is making the kebabs. We are certain of the unimpeachable truth of the description" ("The Royal Academy," p. 163). While such "description" and visual detail suggest the need for deeper interpretation, none of Lewis' compositions seem to have a particular narrative in mind (Nicholas Tromans, "Genre and Gender in Cairo and Constantinople", The Lure of the East, British Orientalist Painting, exh. cat., London, 2008, p. 84). Indeed, many of the items of the shop were likely assembled in Lewis' British studio from purchases made both in Istanbul and later in the Cairo bazaars, and repeatedly rearranged again and again in various compositions. This emphasis on decorative affect bothered few of Lewis' contemporaries, and only added to the work's distinct appeal, described by Francis Turner Pelgrave as "the deep, settled enjoyment of wealth, possessed or prospective, which has long marked the Eastern merchant. There is not a line or a tint in this strangely fascinating picture but tells of rich repose and sheltered coolness: Compared with the agitation and the fret of European life, these... merchants of Lewis appear like the voyagers who have reached the Lotos-Land.... What a long result of centuries Lewis has concentrated in these little works,---and all by absolute truthfulness! Here is no incident shown, no moral suggested, no manners set out for illustration... only the real character of a whole nation" (Pelgrave, p. 58).

It was Lewis' experiences in Turkey and Egypt that allowed his audience to assume his work's authenticity. Returning to London, Lewis left behind his exotic public persona developed during his years in Cairo to a reclusive life outside of the city adding a sense of intrigue to his reputation. Lewis now focused exclusively on the finely painted pictures of the Middle East, which fed the public's desire for ever-more elaborate pictures of the region that was becoming increasingly well documented (Emily M. Weeks, "Cultures Crossed: John Frederick Lewis and the Art of Orientalist Painting," Lure of the East, p. 26). And while the initial fervor for Orientalist paintings subsided somewhat by the turn of the nineteenth century, The Kibab Shop, Scutari, Asia Minor remained eagerly sought for acquisition. Through the early twentieth century the present work belonged to Colonel Hugh Edward, 3rd Lord Joicey, D.S.O. (1881-1966), of Ford Castle, Bewick-on-Tweed. Joicey, along with his brother, and his father who owned profitable coal mines, built an impressive collection notable for its Victorian painters such as John Everett Millais.
at 1:00 PM