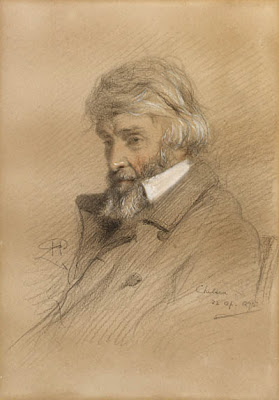 The present drawing is a preliminary study for the oil painting in the National Portrait Gallery in Edinburgh. Thomas Carlyle (1795-1881) was one of the greatest men of letters of the 19th century. Born in Dumfriesshire, he entered Edinburgh University at the age of 15 and thereafter contributed reviews on German literature to various Scottish publications. He moved to Cheyne Row, Chelsea in 1834 and published his celebrated work on the French Revolution in 1837.

Lectures On Heroes, Hero Worship and the Heroic in History followed in 1841, with publications on Chartism and the future of labour, Past and Present, appearing almost simultaneously. Further major works, Oliver Cromwell's Letter and Speeches, The Life of John Sterling and A History of Frederick the Great followed in 1845, 1851 and 1865. Several volumes of Carlyle's correspondence were published postumously.
at 6:00 AM