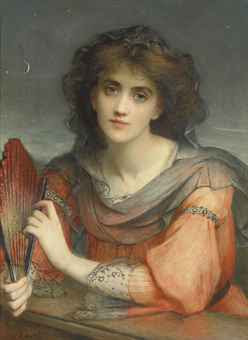 Hallé was born in Paris, the son of (Sir) Charles Hallé, the pianist and conductor, and came to England at the time of the revolution of 1848. Much of his young adulthood was spent in Italy, but back in London he established himself as a portrait painter while also attempting imaginative and literary themes. In 1877 he and Joseph Comyns Carr assisted Sir Coutts Lindsay in founding the Grosvenor Gallery to show the work of the more advanced artists of the day: the venue immediately became the flagship of the Aesthetic Movement. When, in 1887, disputes arose over the running of the Grosvenor, Hallé and Carr withdrew and, with the support of Burne-Jones and other luminaries, opened the New Gallery in Regent Street the following year. Hallé continued to paint, exhibiting regularly at both the Grosvenor and New Galleries, but he is remembered chiefly for the part he played in these ventures. The present picture has not been identified, nor is it clear whether it is essentially a portrait or an imaginative conception. It is, however, highly characteristic of Hallé, with its echoes of Venetian painting and Burne-Jones and its general mood of 'aestheticism', created not least by the fan, one of the primary motifs (like the peacock feather and the sunflower) of the Aesthetic Movement.
http://www.christies.com/lotfinder/charles-edward-halle-luna/5521057/lot/lot_details.aspx?from=salesummary&pos=10&intObjectID=5521057&sid=9954c15e-eda4-4842-adcb-7417973762cc&page=1
at 6:00 AM